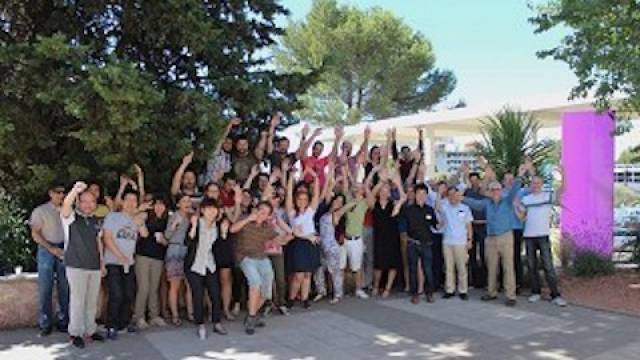 The first ICG Montpellier Summer School took place in 2009 as an outcome of the EFONGA project sponsored by the European Community. The 8th School was held in July this year, and the numbers attending remain strong.

Of course the event itself is evolving. Formal lectures were initially 100% of the teaching but now they constitute less than 50%, perhaps just over half if the first afternoon is included. The first afternoon is when students talk for 5 minutes about their own research aspirations. It serves as an ice breaker, a chance to practice speaking to a large audience and the class as a whole is made aware of the enormous breadth of the subject. The remainder of the school is mostly project work, researched on site, and tutorials. The project is an open-ended group exercise and is reported formally at the end of the week; each of the seven groups makes a presentation in whatever format they decide is appropriate. Tutorial sessions under the pine trees are now fully integrated into the program.
Six of the lecturers arranged discussions with small groups, some more or less structured and others simply based on student questions arising from the lecture content. Networking is strongly encouraged and occurs during coffee breaks, over lunch, during an opening welcome party and closing banquet, and finally, not least, on the beach during a brief interlude in the hectic program. As always the participants created their own Facebook account to allow longer term interactions post-school.
This year there were 36 participants, 28 of whom signed up for a Glass Science stream and 8 for Glass Technology. Three of these students on the day adopted a mix-and-match approach. Several countries were represented, 10 in all. On the first day everyone attended the same introductory courses and the seven project groupings had participants from both streams mixed together. Most lecturers gave two one hour presentations and their contribution, freely given, is greatly appreciated. Indeed many of the students questionnaire responses commented on the friendliness of the lecturers and the quality of their teaching.
The morning of the last day was the opportunity for the students to demonstrate their lecturing skills and to present their conclusions on the set projects. Of course this naturally forms part of the overall teaching and is done competitively so all students are strongly encouraged to interrogate other groups in an attempt to undermine their credibility. The tension built during the morning as the class slowly grew in confidence. The final judging proved tight, and eventually two first prizes were awarded, one to the group examining mechanisms of sodium ion diffusion and the involvement of non-bridging oxygen (Helene Pablo, Luka Pavic, Celine Ragoen, Alessio Zandona, Abdul Rahshidi), and the second to a group tasked with creating a project for a final year undergraduate student on glass melting (Vickie Falk Jensen, Miroslava Huyjova, So Sakurai, Damier Bolore, Frederik Van Hoof, Ana Aznar). Third place went to the big EGO company based on an Environmental Glass Organisation, set up to win a large international prize by solving a major social issue (Thorben Welter, Laura Aalta-Setala, Julian Moriceau, Ben Allsopp, Philipe Kiefer).
More information is available on the ICG web site (www.icglass.org/education).
The 8th ICG summer school is planned for July 2017 with sessions on the use of computer modeling in glass science and technology as the second theme alongside Glass Science. Discussions have also begun on ways of celebrating the 10th School in 2018; the publication of a book summarizing the schools, their history and their contents is one possibility. We welcome queries and applications from interested teachers as well as students.