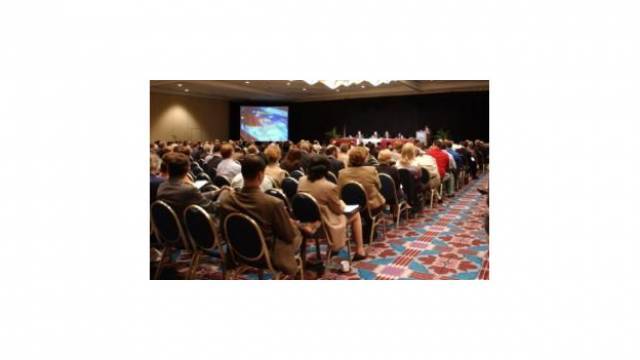 ACerS president Richard Brow and executive director Charlie Spahr participated at the recently-held ICG meeting, which took place in Prague. Their presence at the meeting is part of their ceramic and glass ambassadorial trip to Europe, intended to expand intersociety collaborations.

After concluding their meeting with the European Ceramic Society, ACerS (American Ceramic Society) president Richard Brow and executive director Charlie Spahr reached the next stop on their ceramic and glass ambassadorial trip to Europe – the 23rd International Congress on Glass meeting in Prague, Czech Republic.
The International Congress on Glass series, which is sponsored by the International Congress on Glass (ICG), is held every three years with annual meetings in between. This year’s ICG 2013, which took place 1-5 July, was organized by the Czech Glass Society and the Slovak Glass Society.
The congress opened with a keynote address from L. David Pye, past president of ACerS as well as ICG. Also in the opening formalities, Brow accepted the ICG President’s Award from ICG president Peng Shou on behalf of honouree Delbert Day, who was unable to attend.
Titled “Glass and the nanotechnology paradigm,” Pye’s address was very well received, Spahr reports. In a news release from Alfred University, where he is emeritus professor and dean, Pye explains the glass–nanotechnology connection: “Long before nanotechnology became a buzzword, glass scientists were working on microcrack theory, amorphous phase separation, photosensitivity, photonucleation, ligand field theory, controlled crystallization, ion-exchange and resolution of glass theory, all processes that occur at the nano-level. Our understanding of glass at the nanoscale level has led to some remarkable applications in such diverse fields as energy, medicine, photonics, architecture, transportation and communications.”
Brow and Spahr also met with representatives from the Chinese Ceramic Society to discuss intersociety cooperation and the ICG 2016, which will be held in Beijing. Members of ACerS (led by Dick Brow) and Chinese Ceramic Societies led by Peng Shou, along with members of the ICG leadership team met for a lunch facilitated by Manoj Choudary and Fabio Nicoletti (representing ICG), to foster stronger cooperation between ACerS and CCS.
“Both societies agreed on meeting more often – at least once per year – to support each others’ work, such as the upcoming ICG meeting in Beijing in 2016 and the 2019 meeting in USA, as well as other society activities,” according to Spahr. ACerS representatives will start by visiting China for the Glass Expo in spring 2014.