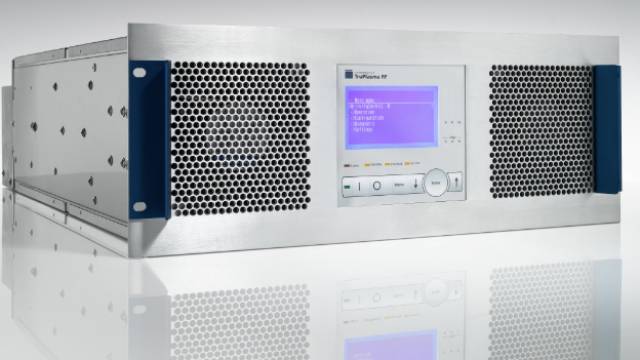 The TruPlasma RF 3012 high-frequency generator from Hüttinger Elektronik is the German company’s response to the demands of RF process power supplies for good efficiency levels and robust design. The generator has an innovative class D converter topology combined with a patented high-frequency power coupling technology, thus making it unique to the market.

Hüttinger Elektronik’s TruPlasma RF 3012 has an output power of 12 kilowatts with a frequency of 13.56 megahertz and is ideally suited for PECVD, etching and RF sputter processes in the flat panel display, solar and semiconductor industries. The user can design these production steps very efficiently with the TruPlasma RF 3012, thus achieving significant cost savings.
The TruPlasma RF 3012 is equipped with an innovative class D converter topology that allows an 80% degree of efficiency. In comparison to previous power supplies which have a 60% degree of efficiency, the TruPlasma RF 3012 demonstrates a power loss reduced by half. “In a typical PECVD coating system, in which passive SiNX coatings are applied to wafer-based solar cells, a generator often runs 22 hours a day, 355 days a year. At current power prices, the increased efficiency generates cost savings of approximately 3,500 Euros per year per power supply,” said Ulrich Ambrosy, Director of Product Management at Hüttinger Elektronik. “This savings potential is especially significant if you imagine that such a system frequently has several process chambers, each of which is equipped with several power supplies. The reduction in operating costs here is quite significant.”
The reduction in power loss also means the TruPlasma RF 3012 has a reduced need for cooling. This opens up additional savings potential in cooling water usage and reduced infrastructure investments. Last but not least, the high degree of efficiency contributes to adherence to CO2 emissions goals in production, making an important contribution to environmental protection.
The TruPlasma RF 3012 is distinguished by a highly robust design which is made possible by the patented high-frequency power coupling technology CombineLine. CombineLine combines the power of internal transistor modules and feeds it into the output. Power reflected due to mismatches is conducted into a water-cooled resistor in the device. The transistor modules are protected completely and the generator can absorb the reflected power without a problem – resulting in a highly robust and reliable device.
In addition, CombineLine has true 50 ohm output impedance and it can therefore, balance out process fluctuations at any point. This is where differences arise from conventional RF switch-mode power supply technology. In some processing conditions small process fluctuations are amplified which prevent stable operation. To prevent such unstable processes, users must match the cable length between the generator and the vacuum chamber precisely to the process. This is very complicated and can cause problems with changing processing conditions.
With CombineLine, these efforts are no longer necessary. The system can be operated with any cable length, which increases the user’s flexibility and allows space and cost-optimized integration of the power supply into existing system concepts.
Another advantage of the TruPlasma RF 3012 is its many and varied communication interfaces. In addition to the common interfaces such as analogue, RS232, Devicenet and Profibus, the generator also has an EtherCAT interface. “Soon, EtherCAT will be the new market standard,” said Ambrosy. “Therefore, the TruPlasma RF 3012 is already laid out for future-oriented bus systems, allowing today’s users to orient their systems toward the future market standard.”
The TruPlasma RF 3012 also fulfils the ever more important requirement for reliable RF arc management. Its fast, technically sophisticated arc management helps complete today’s demanding processes and is prepared for future applications.
To ensure that the TruPlasma RF 3012 also fulfils the highest requirements, it was subjected to an extensive test and qualification programme in the development phase. For this, Hüttinger has maintained its own extensive test and qualification centre since July 2012. In more than 1,000 square meters, the Hüttinger application engineers ensure optimal product quality for market introduction.
During production of the TruPlasma RF 3012, Hüttinger also adheres to product industrialization steps, which means it pays attention to the consistent automation of production and calibration. For example, the comparison of the activation signals is done completely automatically for the 32 power semiconductors in the power supply. The advantage here is the individual production steps are up to 100% reproducible and can be performed very quickly. Therefore, error-free production processes and even product quality are guaranteed.
Hüttinger Elektronik is a global leader in the manufacture of power supplies for plasma-based coating processes, induction heating and laser excitation. In many high-tech industries, the company’s products provide the necessary process energy: Hüttinger’s plasma generators allow functional coating of solar cells and microchips. The company is a market leader for coating processes in the manufacture of flat panel displays and architectural glass. Hüttinger’s induction generators serve a broad spectrum of classic applications such as hardening, annealing, soldering as well as high-tech processes such as crystal growing. With more than 700 employees, the company achieved sales of 129.5 million Euros in the 2011/12 fiscal year.
Hüttinger Elektronik has development and production locations in Germany, Poland and the US, as well as sales and service locations in Europe, America and Asia. The company’s headquarters is in Freiburg, Germany. Since 1990 Hüttinger Elektronik has been part of the Trumpf Group.