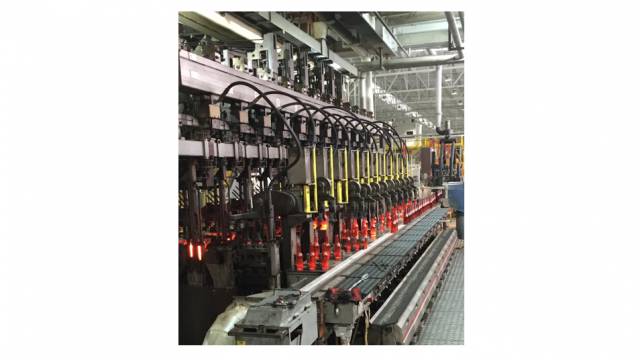 Heye has announced that it was responsible for a recent project at Brazilian Ambev, which involved the delivery of three 12-section triple gob IS machines to more than double the plant’s manufacturing capacity.

Specialising in the high volume production of beer bottles, the Ambev glass container factory in Brazil has been the subject of major investment in recent months. Ambev is part of Latin America’s leading beverage producer and has received first-class training for its production personnel, as well as advanced manufacturing knowhow from one of the industry’s main players.
Germany’s Heye International GmbH was responsible for the coordination of this project, including the delivery of three 12-section triple gob IS machines to more than double the plant’s manufacturing capacity. The intelligent multi-zone central lubrication system in the machines helps to reduce the consumption of lubricants, keeping the machine cleaner. A diverse range of advanced equipment was also supplied, from feeder mechanisms to lehr loaders.
Relying on the proven field experience of Heye International experts, extensive staff training was arranged to maximize productivity, both on-site and at Heye’s headquarters in Obernkirchen. Among the important subjects addressed were wide-ranging production, mechanical and electrical issues, as well as specialist mould repair training. “These training programmes were positively received by local glassworks personnel in Brazil,” confirmed Lorenzo Barquin, Global Director Glass Operations at Ambev.
Based at Obernkirchen, Germany, Heye International GmbH is one of the international glass container industry’s foremost suppliers of production technology, high performance equipment and production knowhow. Its mechanical engineering has set industry standards for more than five decades. Extensive industry expertise, combined with the positive attitude and enthusiasm of Heye International employees is mirrored by the company motto ‘We are Glass People’. Its three sub-brands HiPERFORM, HiSHIELD and HiTRUST form the Heye International Smart Plant portfolio, addressing the glass industry’s hot end, cold end and service requirements respectively.