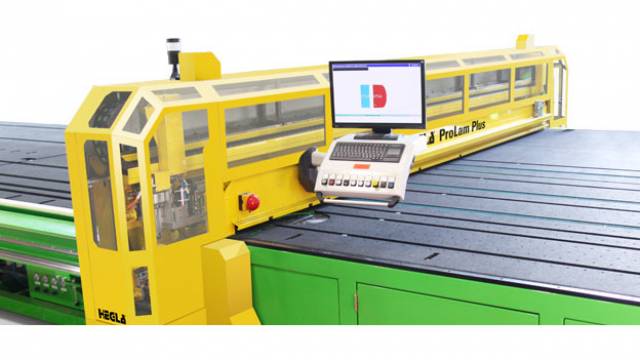 HEGLA’s new cutting system – the ProLam Plus – can, the company says, automatically and precisely cut free forms and models from laminated safety glass.

With the new ProLam Plus, HEGLA is unveiling a new cutting system with which free forms and models can be cut automatically and with precision from laminated safety glass.
HEGLA’s search for an optimized technical solution has taken a number of years to achieve. The basic principles for the process technology had already been identified in 2001. The application for the patent for the invention was filed in the same year. HEGLA had sought to develop a new system that is not only capable of cutting LSG models, but which also offers high precision and short cutting cycles. A drive concept which has been improved over the years is now the platform for meeting these high aspirations.
The development of the cutting process for laminated glass has been taken further for automatic model cutting on the ProLam Plus. The underlying principle has stayed the same: The cutting bridge is mounted in a fixed position, making the multi-axis cutting process for models that much more elaborate. While the cutting heads have been able to score the glass in X-direction in the past, this was not possible on the Y-axis due to the fixed position of the cutting bridge. In order to accomplish this motion, the glass is concurrently fixed by twin grippers and accurately moved according to the cutting plan. The cutting heads follow the contour with a synchronous electro-mechanically controlled rotating motion. This method permits any model to be executed that could previously also be scored in float glass applications. The scoring process itself is performed synchronously on the top and bottom sides by one cutting head each.
HEGLA has used advanced CNC drive technology in combination with servomotors to achieve the precision it requires in the cutting head and in the positioning bridge with the twin grippers. Beneficial experiences have also been achieved with the ProLam and AdvaLam series of cutting systems, which have proven their worth in the past through precision, acceleration and speed.
The cutting head is not aligned in the direction of motion in the ProLam Plus through tracking and delayed by the motion of the glass; instead, the cutting head is aligned precisely with its own CNC drive with the motion and with the cutting plan. This facilitates the high accuracy and quality of the contour cuts.
The system performs several process steps, including automatic glass transport, system-controlled positioning and scoring of the glass, which had to be performed on the previous model cutting processes by trained staff in time consuming operations. It does away with the need for cutting templates, and the accuracy of free forms is also no longer dependent on the experienced touch of an old hand.
In the past, the inaccuracies associated with manual model cutting particularly came to light at the latest when the cut glass did not match the fit of the other panes of an ISO unit, or the finished assembly could not be installed in a building façade. The advantages of machine-based model cutting, consisting of shortened cutting cycles and high accuracy, are particularly apparent on large projects of this nature. The ProLam Plus not only scores the sheets with the required accuracy – missing glass resulting from assembly defects can be promptly resupplied as accurately fitting components.
The ProLam Plus can also be used for straight cuts along the X, Y and Z axes. It possesses all the automated processes for this (transporting, positioning, scoring, heating, separating) and is characterised by high cycle times. The smallest residual strip width produced automatically for this system is 50mm.
Depending on customer need, the model cutting plant can be upgraded with a film stripping device, a coating removal module, a cutting head for float glass and an integrated gantry breakout unit.
Optionally, the ProLam Plus can also be equipped with electromagnetic linear drives. In this version, the system is prepared to allow the laser-aided, automatic film separation to be added at a later date.