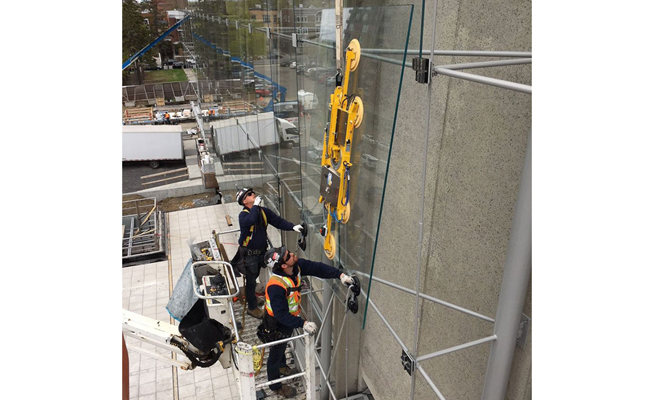 The façade of the Grand Théâtre de Québec, Canada, was in need of a complete renovation.

The envelope around the theatre, built from prefabricated panels and exposed concrete elements back in 1971, had been damaged by moisture. The large façade sections were installed by Heavydrive‘s VSGW 900 KS suction system equipped with a winter package.

The suction system has a load-carrying capacity of 900 kilograms and boasts an extremely flat design. Its depth of just 16 centimetres makes it the ideal solution for installing and transporting sections between façade and scaffolding. Thanks to its variable and detachable arms, the system is capable of suction sections measuring up to 4.3 by 3.2 metres.

The assignment was received during the winter months and the VSGW 900 KS had to withstand icy temperatures. Which is why Heavydrive developed special winter plates that reliably provide suction for glass panes at temperatures down to -20 C°. The large glass elements around the theatre’s façade were placed in position on schedule and without any problems. The customer was so satisfied that they ordered another Heavydrive system.