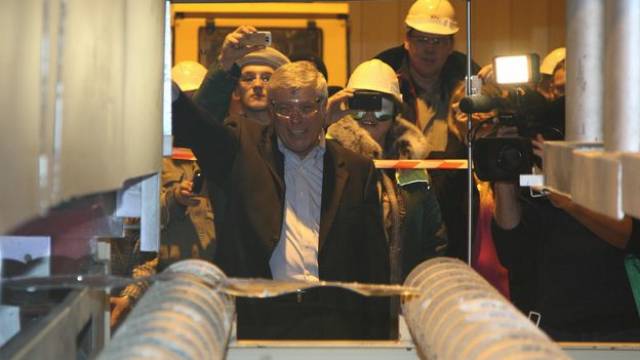 Guardian’s second float plant in Russia has reached a production launch milestone – with the initial “ribbon pull” marking the beginning of production. The plant will produce 900 tons of glass per day, and will include a technologically advanced glass coater.

Guardian Industries Corp. has announced that it has reached a production launch milestone at its Krasny Sulin (Rostov region), Russia float glass manufacturing plant. The initial “ribbon pull” marking the beginning of production took place on 10 December, pulled by the local team and applauded by colleagues from around the Guardian world. The USD 220-million plant is Guardian’s largest to date, producing 900 tons of glass per day, and will include a technologically advanced glass coater.
The Rostov region plant will make an important contribution to area economic growth, providing an essential building material for the region and beyond. It will produce Guardian’s high-performance, energy-efficient ClimaGuard® (residential) and SunGuard® (commercial) glass products for the construction of homes, offices, retail, health-care and other facilities.
The location is a good fit for Guardian’s growth strategy to supply glass to Russia and neighbouring countries. The area is close to Sochi, home of the 2014 Winter Olympics. In 2008, Guardian began production at its first Russian plant in Ryazan, serving the greater Moscow region.
“Guardian is bullish on Russia given the excellent growth at our first plant in Ryazan and the customers we have in the country,” said Scott Thomsen, Guardian Global Glass Group president. “The timing is right for the region and for Guardian.”
The new plant is located 957 kilometres (594 miles) from Moscow in the southern part of Russia along the Azov Sea. Southern regions of Russia are mainly agricultural with a huge potential for use of its natural resources, a large workforce and a well-developed transportation infrastructure.
“We have enjoyed strong support in Russia from both the local government and a wide variety of customers. Our sales programmes at the new plant will focus on the southern Russian and the East Ukrainian regions,” said János Együd, managing director of Guardian Steklo Services, the company overseeing the Ryazan and Rostov plants. “In fact, our customers are very ready for us to begin production and have looked forward to this day.”
Guardian was one of the first companies to invest in Eastern Europe beginning construction in Hungary in June 1989, prior the fall of the Berlin Wall, and presently operates facilities in Hungary, eastern Germany and Poland, among other European locations.