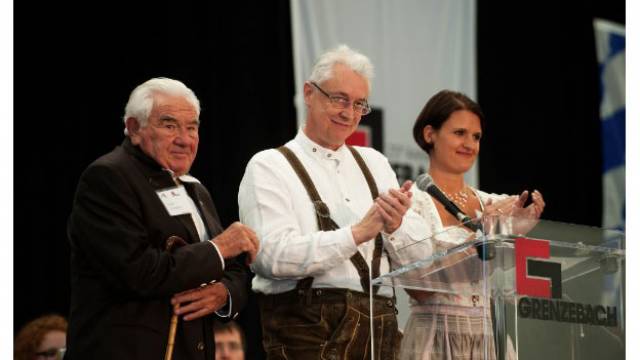 During the recent celebrations for its 25th US anniversary, Grenzebach held a typical German Oktoberfest. Highlights of the celebration included the speech of Rudolf Grenzebach, founder and owner of the company.

Grenzebach celebrated its 25th anniversary in Newnan, Georgia, US, with a typical German Oktoberfest. Among the highlights of this celebration was the speech of Rudolf Grenzebach, founder and owner. His daughter Sonja translated it to the audience. He also had had a dream, the American dream; a dream of opportunities in a country that people in Europe could not even imagine. He thanked all the members of his team for their reliability, their dedication and commitment. “I am very grateful and proud of our staff here in Newnan,” he said and added that he was also honoured to be one of just 18 companies in Georgia to receive the SHARP award from OSHA this year in August.
Johnny Hosmer, Allan Burkett and Bruce McGuffey were honoured for their 25-year-long service at the Newnan facility and were given framed certificates. “I do not take this dedication for granted. I’m very grateful to you,” said Rudolf Grenzebach.
Newnan Mayor Keith Brady and State Rep. Lynn Smith expressed their gratitude for Grenzebach’s involvement in the community and praised its executives for a company with “family anchored” values – which are demonstrated through internship and apprenticeship programmes and continued work with STEM (science, technology, engineering and math) education.
The Honorable Philip Tomlinson (Georgia Economic Development Board of Directors) presented a letter from the Governor to the Grenzebach family.
Deputy Consul General of the Federal Republic of Germany Thomas Wülfing as well as the Former Commissioner of the Georgia Department of Economic Development were also present to congratulate the Grenzebach family on their success.
The “Grenzebach Buam” band, composed of Grenzebach employees in Bavaria, and a fully automated Grenzebach beer-pouring robot were flown in to Newnan to give this celebration traditional Bavarian charm.