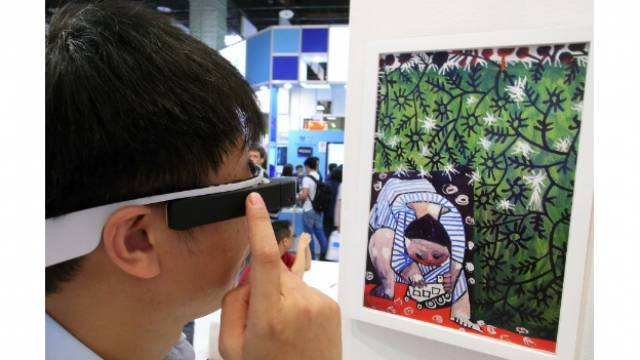 Google Glass already has a tough competitor. Taiwan-based ChipSiP, a maker of memory chips and network equipment, has, in fact unveiled its own smart glasses, called SiMEye.

Google Glass, on sale right now in the US, could be facing a challenge from a Taiwanese smart glass maker.
ChipSiP, a maker of memory chips and network equipment, has unveiled its own smart glasses, called SiMEye, which look similar to Google Glass, run on full version on Android 4.2.2, and have already received the Best Choice of COMPUTEX TAIPEI 2014 Award.
ChipSiP SiMEye Smart Glass includes the features of real-time entertainment, real-time communications and real-time sharing in a small wearable display for everyday activities.
SiMEye boasts a 5-in-1 system SiP, a dual-core 1.5 GHz ARM based application processor, two units of DDR3L and two units of NAND, 720p near-eye display, wireless, GPS, 9-axis sensor, camera and microphone.
It features Bluetooth 4.0 wireless connection, near-eye HD resolution of 1280×720 resolution, supports 500-megapiexl camera and full HD 1080p videos recording.
According to ChipSiP president George Tai, users can share their visual world in real-time, or have an immediate live view chat with their family and friends in a remote distance with SiMEye Smart Glass.
“With the standalone and standard Android platform, the SiMEye Smart Glass allows users to download their favourite apps now, and enjoy the wearable entertainment.
“The eyewear provides instant access to information anytime, anywhere through any cloud service. Featuring the interaction with smartphones, users can manage phone calls and updates in real time without taking their phones out.”
What could be a real challenge for Google Glass is that ChipSiP plans to offer its smartglass for USD 500 in retail price, which is third of the price Google Glasses being offered in the US.
Taiwan’s Industrial Technology Research Institute (ITRI) has also unveiled a smartglass prototype at Computex.
The prototype features is similar to Google Glass, has a head mounted display and runs on Android 4.2. It features two cameras and, instead of relying on voice commands, it can users’ hand motions, PC World reported.
The glass can be controlled by hand gestures and can switch between apps with swipe of hands.
ITRI researcher Chih-Hsiang Yu said: “You could just leave your smartphone in your pocket, and then use your hand gestures to look up content. You wouldn’t have to speak, you could just use your motions.”