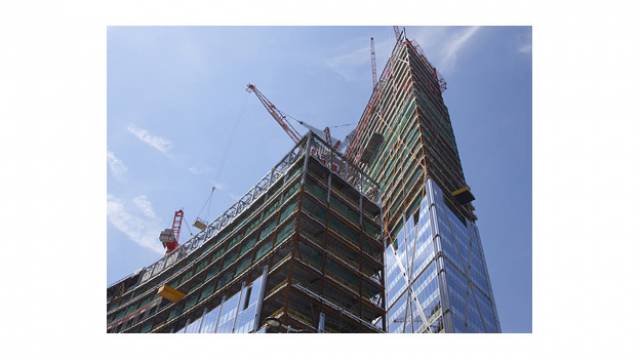 World construction activity will accelerate by USD 6.3 trillion or 70% by 2025, with the explosion in growth boosted by a new generation of ‘Asian Tigers’, according to the recently published Global Construction 2025 report.

The ‘Global Construction 2025’ report, which was by sponsored by 24 major companies, found that construction will account for 13.5% of world output by 2025, with activity driven by rising populations in the developing world, plus increasing urbanization.
“Urbanization is one of the largest challenges facing the human race. Growth in the world’s global mega cities gives rise to major challenges for the engineering and construction industry. Some two billion additional city-dwellers are expected by 2050, giving rise to challenges regarding the supply of power, water, sanitation, housing, offices and transportation as well as doing this sustainably and developing new cities of the future,” said the report, which was written by industry experts from Global Construction Perspectives and Oxford Economics.
While two-thirds of global construction will be focused in China, India and the US, the authors noted that activity in emerging Asia will be increasingly driven by Vietnam, Indonesia and the Philippines, which they termed the new Asian Tigers.
“While China is far from becoming a developed economy … this challenge does not reduce China’s importance as a large and fast-growing construction market. (It does) open opportunities in a new generation of faster-growing Asian Tigers that will help propel regional growth,” the report said.
The authors highlighted Indonesia as “perhaps the most dynamic” of their new Tigers, and forecast its construction market would post average annual growth of over 6%, up until 2025.
“Indonesia will become the world’s third largest housing market globally by number of new homes that it needs to build each year, slightly more than the average number for the United States. Indonesia’s ‘Key Economic Corridors’ are centred on growth of key industrial sectors and building the necessary infrastructure to support economic growth,” they said.
Meanwhile, the authors said that Vietnam and the Philippines would post average annual growth of 5%.
“Both Vietnam and the Philippines will benefit from broader inter-regional trade flows with China and neighbouring economies, as well as the need for investment in essential infrastructure and production capacity as their level of economic development increases,” they said.
Although China overtook the US as the world’s largest construction market in 2010, the report still forecast healthy growth of 40% in US construction by 2025.
“The recovery in the US construction market, which started last year, is forecast to continue, with housing remaining the fastest growing sector. We forecast the volume of construction output in the US to grow by over 75% between 2012 and 2025,” the authors said.
Additionally, they forecast that the US needs almost 20 million new homes by 2025, averaging at 1.5 million homes to be built each year.
In stark contrast, the report predicted that the European construction sector will be 5% smaller in 2007 than at the start of the global financial crisis.
“Any cyclical upturn in western Europe, after the ‘double-dip’ downturn in construction activity during 2008-10 and 2012-13, will be very weak. With household purchasing power declining amid declining real wages and record-high unemployment, there will be little source of residential construction demand. Cash-strapped governments have little scope for significant infrastructure investment and uncertainty over finding a long-term solution to the deep-rooted financial and fiscal woes in the euro zone are severely constraining business investment in new capacity,” the report warned.
However, the UK stood out as an exception. Its construction sector set to expand by almost double the average rate in western Europe.
Among other factors, the authors highlighted the UK’s housing shortage and government housing stimulus measures for its exceptionality.
“There is a pressing need to modernize ageing infrastructure and to build more new homes to prevent a widening housing deficit in the UK, but we also expect to see more investment in UK infrastructure and real estate from China and other Middle East sovereign wealth funds.
“In addition, stronger trade links to a growing US economy, and more positive population and demographic drivers, point to a stronger medium-term performance for the UK construction market relative to the rest of Western Europe,” they said.