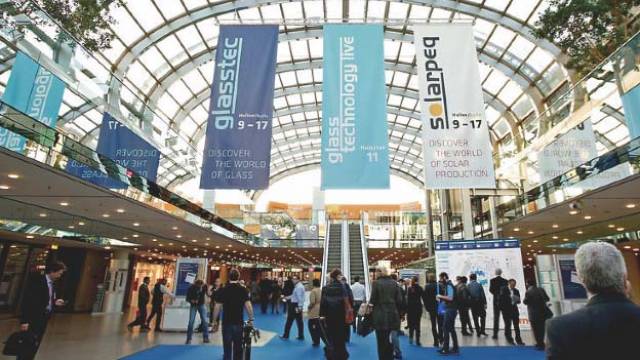 glasstec 2012 received – according to a report from the organizers – positive feedback from both visitors and exhibitors. According to Prof. Dr.-Ing. Udo Ungeheuer, President of glasstec 2012 and Chairman of the Management Board of SCHOTT AG, “glasstec 2012 sent out a clear positive signal for the sector in economic times that are difficult to predict, and proved its quality as a fair of innovations and the key meeting point for the sector.”

glasstec 2012 sent out clear signals in an ambivalent economic climate. This was the general tone expressed by the large majority of the about 43,000 trade visitors. Far more than half these specialists assess the future economic climate in the sector as positive. The response from the 1,162 exhibitors at the world’s most important trade fair in the glass sector also underline this good mood.
Visitors from the fields of mechanical engineering, industry, skilled trades, architects/(façade) planners as well as the solar sector all gave glasstec 2012 a ‘good report’. Alongside the positive mood for the future their ratings in terms of achieving visiting goals and the quality of the trade fair range were excellent. Both these areas scored significantly over 90%. With that result glasstec underlines its status as the world’s leading trade fair with a constantly high number of international visitors accounting for well over half of the audience. Also continuing at the highest level is the proportion of visitors from mid- to top management who account for over two-thirds of glasstec attendees. What is particularly striking is the significantly higher willingness to invest amongst German management.
“glasstec 2012 sent out a clear positive signal for the sector in economic times that are difficult to predict, and proved its quality as a fair of innovations and the key meeting point for the sector,” said Prof. Dr.-Ing. Udo Ungeheuer, President of glasstec 2012 and Chairman of the Management Board of SCHOTT AG.
“Exhibitors reported good order activity amongst their customers. This shows that glasstec came exactly at the right time. This news does the sector good and underlines the international importance of the fair,” commented Hans Werner Reinhard, Deputy Managing Director at Messe Düsseldorf.
The comprehensive supporting programme at glasstec went down well with visitors. More specifically the special show “glass technology live” once again attracted a great deal of interest. Under the heading “Innovative Glass Functions” Prof. Stefan Behling and his team from Stuttgart University’s Institute of Construction Design (Institut für Baukonstruktion) caused a stir with numerous exciting exhibits – the practical products of the near and distant future. These for instance included a window incorporated into glazing without any visible frame construction, bent but still stable glass, organic, building-integrated photovoltaics as well as large-format façade elements. In combination with the neighbouring “Competence Center Glass, Window, Facade”, which bundled know-how from various associations, these façade mock-ups formed the “Facade Center”. The “glass technology live” show was accompanied on all days of the fair by a free symposium on a variety of topics attended by numerous visitors.
The range of special shows was complemented by the Skilled Trades Center “Zentrum Handwerk” – impressively demonstrating at its glass house the glass solutions available from the skilled trades for and in the house – and by the “glass art” exhibition. Specially designed for auto glass specialists was the “Autoglass Arena” with its international auto glass contest and the German championship plus its comprehensive, specialist plenary meeting.
Aimed at architects, civil engineers and related professions were the “engineered transparency” conference with its technical focus on glass construction technology and the architects’ congress featuring internationally renowned speakers.
Already a day ahead of the fair top-flight experts from the glass and solar industry discussed their interfacing markets at the conference “Solar meets Glass – 3rd Industry Summit for Markets, Costs and Technology”. As early as 2013 Düsseldorf will already provide them with further opportunity to discuss these issues at the next edition of the conference on 9 and 10 October. “With this platform we wish to offer our customers the opportunity to benefit from targeted specialist exchange also in the ‘glasstec-free’ year. This means despite the current economic climate new sales opportunities can be opened up for the glass industry in the medium term while the solar industry can use the know-how of the glass industry on its path to achieving greater efficiency levels and lower production costs,” explained Hans Werner Reinhard.
The next glasstec/solarpeq will be held in October 2014.