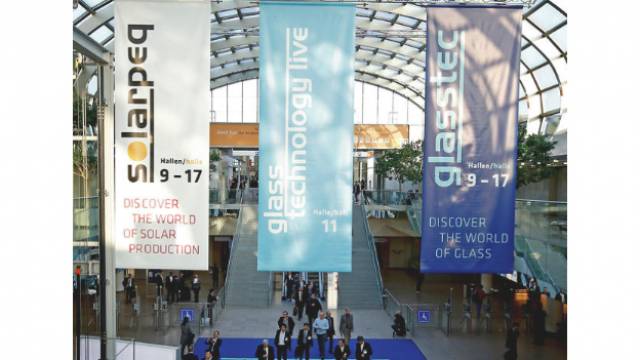 glasstec 2014 will be taking place 21-24 October, once again at the fair centre of Düsseldorf. Exhibitors can, as of June this year, start registering directly online, with the deadline fixed for 15 December.

The dates for glasstec 2014 are set: the event will be held at the Düsseldorf Exhibition Centre from 21 to 24 October 2014. At the first Advisory Board meeting for the forthcoming trade fair a number of key decisions were made charting the course for the future. For instance, the official opening will be brought forward from the first day of the trade fair to its eve with a view to providing more time for an in-depth exchange between the top decision-makers invited from the international glass sector. Furthermore, this allows visitors and exhibitors to make even more efficient use of the first exhibition day. The opening event will be held off the trade fair grounds and will include a high-calibre supporting programme.
In addition to this, solarpeq – International Trade Fair for Solar Production Equipment, will be completely integrated into glasstec in 2014. In future, it will enhance the ranges of the world’s largest glass trade fair and feature manufacturing technology for crystalline and thin-film photovoltaics as a special themed area. glasstec stands out with its unique array of different ranges across all stages of the value chain as well as its versatile special themes and conferences.
glasstec 2012 made a clear statement in an economically ambivalent environment – was the general opinion of a clear majority of the around 43,000 trade visitors. Visitors from the sectors of mechanical engineering, industry, skilled trades, architects/(façade) planners as well as solar systems gave glasstec 2012 good scores and high satisfaction ratings. Just as positive was the verdict of the exhibitors polled in the official survey. From June 2013 interested companies can register for glasstec 2014, which will once again become the global meeting point for decision-makers from throughout the “glass world”.
Exhibitor applications are now available online for the event, with a deadline for registration on 15 December 2013.