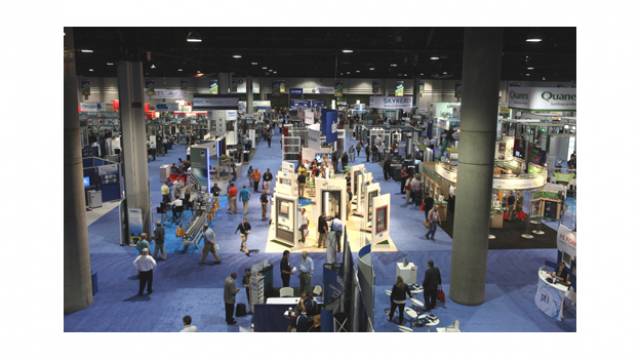 With more than 6,200 attendees and 360 exhibitors, GlassBuild America reports an upbeat mood reflecting a market that is beginning to pick up speed, with companies announcing new initiatives, firms investing in new equipment and suppliers introducing new products.

GlassBuild America: the Glass, Window & Door Expo, took place 10-12 September in Atlanta, where the mood was upbeat among the more than 6,200 attendees and 360 exhibitors on the show floor. Reflecting a market that is beginning to pick up speed, companies announced new initiatives, firms invested in new equipment and suppliers introduced new products at the Georgia World Congress Center.
“People are in a positive frame of mind,” said Paul Daniels, vice president of sales for C.R. Laurence Co. and its U.S. Aluminum Division. “We are making major investments in facilities. We added a shift at a main manufacturing location, we are doubling the size of another plant, and we have a new plant in South Carolina: a super centre for both U.S. Aluminum and C.R. Laurence products,” he reported on the show floor.
AGC Glass Company North America also announced new initiatives in Atlanta, publicizing its new 234,000-square-foot fabrication facility. Equipped with dedicated insulating glass lines to serve both the commercial and residential markets, the Atlanta facility is expected to employ up to 120-130 people, according to Shane Sieracki, director of operations, AGC Fabricated Products.
Columbia Commercial Building Products, a Consolidated Glass Holdings company, promoted its new glass division at GlassBuild America, representing a significant investment in new equipment and technology. “We want to do as much large commercial insulating projects as possible,” said Nathan McKenna, glass division manager, CCBP. “We have also partnered with Quanex, which has a huge presence here [at GlassBuild America], and we promote their TriSeal Super Spacer.” In addition to insulating services, CCBP now offers cutting, spandrel, auto seaming and tempering.
For.El. SpA also made news on the show floor with the announcement that it was opening a For.El. North America location in the Minneapolis/St. Paul region to offer sales, parts, service and support to customers.
Among the most encouraging signs in Atlanta were the equipment sales. During the three-day event, M3 Glass Technologies, for example, purchased several machines. “We are close to capacity, and have to add capacity,” said Chris Mammen, president. “We’re counting on 2014 to continue the upward trend,” he said, adding that: “this is the time to invest.”
According to machinery and equipment suppliers on the floor at GlassBuild America, glass and metal companies are beginning to invest in capital equipment again. During the downturn, glass companies became lean, reduced staff and spending, and put off major purchases. After years of postponing capital expenditures, or purchasing used equipment from out-of-business companies, spending for machinery and equipment is on the rise, they said.
“We have been very busy, and have seen an upswing in business,” said Kip Crabbe, corporate accounts, machine sales and logistics, Salem Distributing. “People have been sitting on their hands, but are beginning to make investments again.”
“Things are picking up,” agreed Stefano Forlani, executive manager, North America, for Bottero. “It’s slow, but it’s steady and healthy…the industry is prepared to invest,” he said. “They understand what they need, and we’re seeing a lot of budgeting going on. During the last five years, companies would purchase only when they felt obliged to spend money on equipment. Now, we are seeing companies plan, and new equipment is part of those plans.”
GlassBuild America: The Glass, Window & Door Expo returns to Las Vegas next year, 9-11 September 2014.