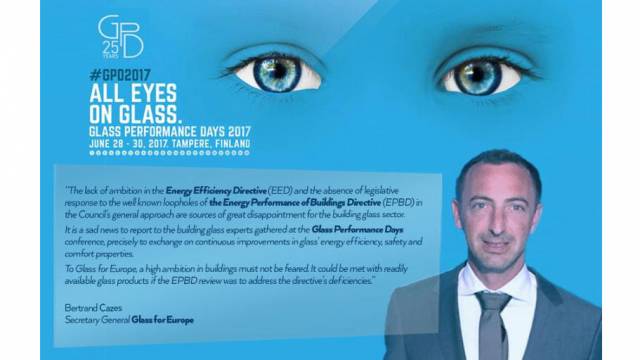 Bertrand Cazes, Secretary General of Glass for Europe gave the association’s reaction to the EU Council General approach on the Energy Efficiency Directive and Energy Performance of Building Directive.

On 26 June, the European Council agreed its position to review the Energy Efficiency Directive and the Energy Performance of Building Directive. The General Approach reached these two dossiers form the basis for the preparations for the negotiations with the European Parliament, which will take place under the Estonian presidency (second semester 2017).
Bertrand Cazes, Secretary General of Glass for Europe: “The lack of ambition in the Energy Efficiency Directive (EED) and the absence of legislative response to the well-known loopholes of the Energy Performance of Buildings Directive (EPBD) in the Council’s general approach are sources of great disappointment for the building glass sector.”
“It is sad news to give to the building glass experts gathered at the Glass Performance Days conference, precisely to exchange on continuous improvements in glass’ energy efficiency, safety and comfort properties.”
“To Glass for Europe, a high ambition in buildings must not be feared. It could be met with readily available glass products if the EPBD review was to address the directive’s deficiencies.”