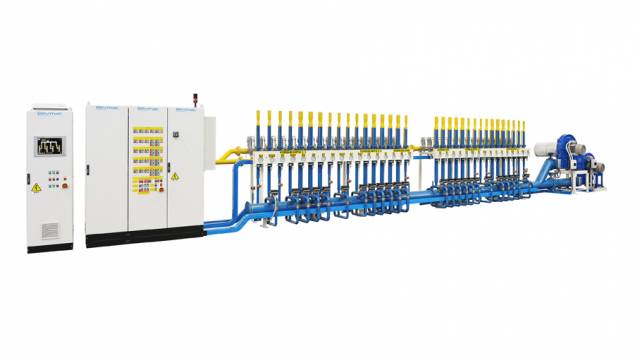 Revimac has supplied almost all the working end and forehearths combustion, cooling and control system for Ghani Glass

Ghani Glass has sourced almost all its working end and forehearhts combustion, cooling and control system from Revimac

With the latest orders placed by Ghani Glass Ltd. for its Hattar F2 and Karachi F4, Ghani Glass will have sourced almost all its working end and forehearths combustion, cooling and control system from Revimac, Italy.
What started as one-time-project for one furnace in 2013, where Revimac specially designed for Ghani Glass F3 the working end and four tandem forehearths in Karachi, has now become the standard for the company.
This successful installation was followed by Karachi’s F6 in 2015 , Hattar F1 in 2017 and now Hattar’s F2 and Karachi’s F4 are in the pipeline for 2018.
Combined together, the Revimac’s systems control more than 150 firing zones and measurement points on 4 working ends and 15 forehearths, a record on its own.
Revimac’s subsidiary Fusiontec also supplied its refractory materials for F1, F2 and F4. Fusiontec started production in 2017 and is already supplying to major companies in Europe, Asia, Japan and the Middle East.