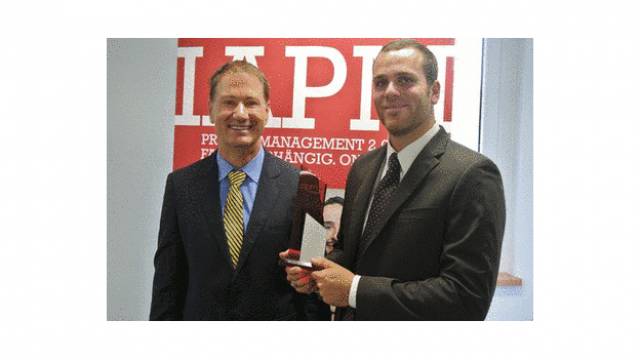 This year’s prize for the ‘Project Manager of the Year’ goes to Felix Hess, a project manager at Gerresheimer Regensburg, Wackersdorf. Since 2012, the International Association of Project Managers (IAPM) has been awarding the prize to project managers who have provided exemplary service in the areas project management expertise, experience in project management, and personal conduct in the project environment.
On 25 September, Felix Hess personally accepted the award from Dr. Hans Stromeyer, President of IAPM.
In his honorific speech, Dr. Stromeyer talked of the exceptional professional competence shown by Hess and also emphasized the prize-winner’s achievements in communicating with superiors and employees. Hess, who has been working for Gerresheimer Regensburg GmbH since 2011, has already led numerous complex investment and development projects for the company. He was responsible for projects every step of the way from the creation of specification sheets to the development of prototypes all the way through to batch production and was also responsible for meeting deadlines and budget requirements while developing production facilities.
Dr. Stromeyer highlighted the fact that these projects ran for the relatively long period of over a year and were of significant strategic importance for the company. Especially decisive for the decision to award him the prize was an international industrialization project for an inhaler at a production facility in the US. Manfred Bauman, COO and CTO of Gerresheimer Regensburg GmbH, also sees the awarding of the prize as a confirmation of the qualification policies of the company. “The further education of our workers is a focus of Gerresheimer Medical Plastic Systems. All of our project managers from the area of Program Management Global are certified in accordance with internationally recognized project manager standards and almost all of them achieve the senior project manager certificate. So we are especially happy to see Mr. Hess recognized for his exceptional achievements.”
Potential candidates for the prize of the International Association of Project Managers – who must be certified as senior project managers – are nominated by the IAPM. The basis for the decision is a comparison of profiles and careful examination of the best project managers and most prominent projects of the last 12 months. The decision for the prize winner is not met by a panel of judges, but is made as a result of objective performance criteria as well as a survey of workers and superiors concerning the personal conduct and the soft skills of the candidate. Felix Hess’ outstanding achievements make him the perfect candidate for the prize. He passed the Certified Senior Project Manager test with distinction; he earned the highest score for the past 12 months with evaluations of his project management experience; and is valued as an exemplary project manager by his employer.