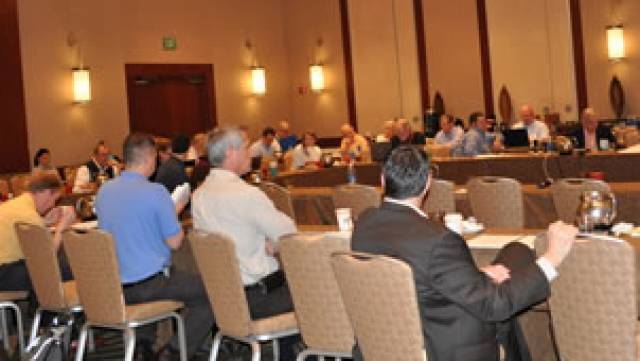 GANA’s annual conference opened on 21 February and will continue until 24 February. The first day of the conference hosted an energy division session with three speakers who discussed areas related to dynamic and solar glazing, along with vacuum insulating glass (VIG).

The Glass Association of North America (GANA) opened its annual conference on 21 February in Sarasota, Florida. During the first day of the conference, which will continue until 24 February, an energy division session featured three speakers who addressed areas related to dynamic and solar glazing, along with vacuum insulating glass (VIG).
Timothy Snow and Robert Tenent of the National Renewable Energy Laboratory (NREL) in Golden, Colorado, spoke about the requirements and potential for windows and concentrating solar power.
NREL has spent time researching insulating glass (IG) unit failure, and is also looking at vacuum insulating glass as an area of growth.
Patrick Sargent, president of the Corona Group, followed with a look at the growing solar industry. Sargent said that the Italian and German markets make up 80% of the entire solar market, even if the US has great potential.
Lucas Turner, PE, provided an update on the effects of ASCE 7 wind map changes, also speaking about the effects of the newest ASCE 7 release, comparing 7-10 with the previous version, 7-05, and the wind map changes made within.
Several GANA divisions and groups also held meetings on the first day, including the Laminating Division’s task groups and subcommittees, the Protective Glazing committee, the Energy Division and the Laminating Division.
Rob Joyce of Guardian Industries provided an update on the Energy Division’s Governmental and Regulatory Affairs subcommittee. The group intends to begin providing quarterly public policy updates, and is proposing that the division organize a Washington, D.C., fly-in.
In conjunction with this effort, the group also aims at developing a website with advocacy tools for members to communicate with their congressional members.
Helen Sanders of Sage Electrochromics provided an update on the Life Cycle Analysis Task Group. “Most of the activity in this group has been focused on product category rules,” she said.
The group is currently working on developing these rules in conjunction with the Department of Energy, through NREL.
In closing, Sanders encouraged all to get involved with the Division’s efforts. “We need active engagement in these strategic initiatives for our industry,” she said.