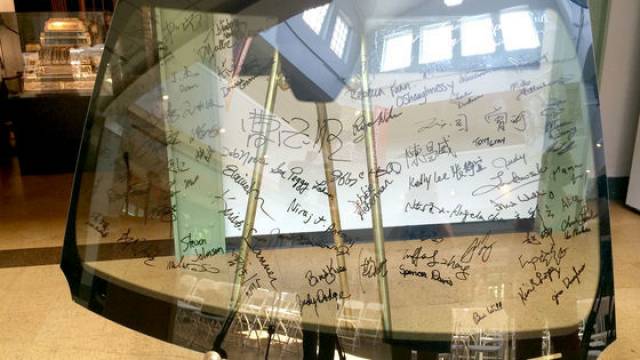 The first windshield built at the new Fuyao glass factory in Moraine has been unveiled at Carillon Historical Park.

Fuyao, a Chinese company that opened a facility in the former General Motors plant in Moraine, began producing glass automotive parts in the spring of 2015. The ceremony on 23 July marks the next generation of industry from the Moraine facility, which ended production of the GMC Envoy in 2008.

The windshield unveiled at the park will be displayed next to the last Envoy produced at the GM factory seven years ago.

Congressman Mike Turner says he fought to revive the GM plant and applauded Fuyao and Moraine for bringing this project to the Miami Valley.

“I would like to congratulate Fuyao on this important day as we celebrate the first piece of glass to come off the production line,” Turner said. “The City of Moraine has welcomed Fuyao to the area and we couldn’t be happier to have them join our impressive business community.”

Fuyao Glass America is expected to employ 400 people at the Moraine facility by the end of 2015. Globally the company employs 18,000 people.