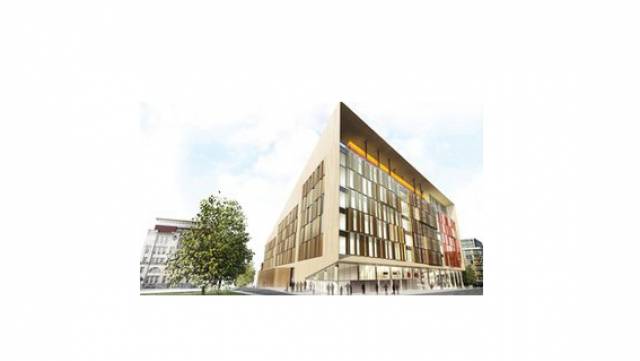 The new Fraunhofer Centre, located in Glasgow, UK, is the most recent international subsidiary of Fraunhofer-Gesellschaft. Researchers from the Fraunhofer Institute for Applied Solid State Physics IAF in Freiburg are cooperating there with scientists from the University of Strathclyde.

Fraunhofer UK Research Limited, the latest foreign subsidiary of the Fraunhofer-Gesellschaft, founded only a few short weeks ago, is already getting started at the Fraunhofer Centre for Applied Photonics in Glasgow.
Glasgow is home to the first Fraunhofer centre operating under the umbrella of the new Fraunhofer subsidiary in the UK. Researchers from the Fraunhofer Institute for Applied Solid State Physics IAF in Freiburg are cooperating there with scientists from the University of Strathclyde.
The British photonics industry is the second-largest in Europe after Germany. Over 80 manufacturers of laser-based products are headquartered in Scotland, and the researchers at the University of Strathclyde are internationally recognized experts in the field of photonics. Fraunhofer institutes have been cooperating with the experts in Scotland for many years. “We are delighted at the opportunity to work even more closely with the University of Strathclyde in future,” explains Fraunhofer Senior Vice President Prof. Ulrich Buller. “The university and more specifically the Institute of Photonics and other research groups have an excellent reputation as regards contacts with industry in general and photonics research in particular.”
Professor Jim McDonald, Principal of the University of Strathclyde, adds: “It is fitting that the UK’s first Fraunhofer Centre is dedicated to lasers, a thriving industry Scotland has excelled in for decades.”
As soon as construction of the university’s new Technology and Innovation Centre is completed, it will be home to Fraunhofer along with research groups from the university and industry. The British Fraunhofer team is still small, but the next four years should see staff numbers go up to 75. The centre’s mission is to cooperate with the best British research groups and develop solutions for industrial clients. Initially, the main focus will be on developing innovative infrared laser sources for optical sensors, which will help to solve pressing, important problems in fields such as environmental technology, process metrology, and medicine. The new Fraunhofer Centre will also be a contact point for other institutes of the Fraunhofer-Gesellschaft looking to move to the UK.
This means further growth in the Fraunhofer-Gesellschaft’s international network, which currently comprises 60 institutes in Germany along with subsidiaries in the US, Italy, Portugal, Austria and Chile. In the coming years, further centres could spring up under the umbrella of the new Fraunhofer UK Research Ltd.