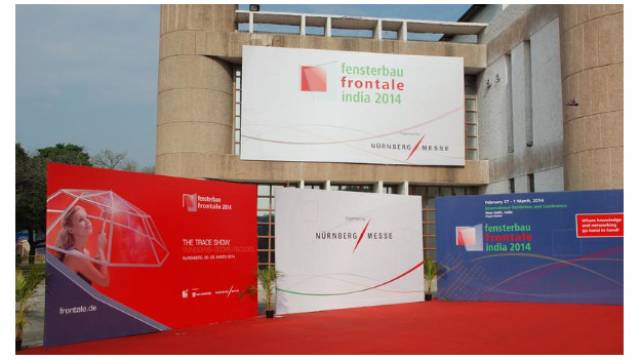 fensterbau/frontale India took place in New Delhi from 27 February to 1 March 2014 at the Pragati Maidan Exhibition Centre. Eighty-two companies, 68 of them from India and 14 from around the world, exhibited at this year’s event.

The fourth fensterbau/frontale india, the International Exhibition & Conference Window, Door and Façade, took place in New Delhi from 27 February to 1 March 2014 at the Pragati Maidan Exhibition Centre. The main focus was on promoting the end product to convince decision-makers of the importance and advantages of system windows over conventional windows. fensterbau/frontale india 2014 was again held parallel to ACREX India, the international trade fair for air conditioning, ventilation, refrigeration and building services.
Eighty-two companies, 68 of them from India and 14 from around the world, exhibited at this year’s fensterbau/frontale india (Mumbai 2013: 73 / Delhi 2011: 47). 4,154 trade visitors sourced information on the spectrum of products and services for windows, doors and facades during the three days of the exhibition. Since its premiere in 2011, fensterbau/frontale india has been organized by the NürnbergMesse Group in cooperation with ift Rosenheim and the International Fenestration Forum and supported by the Indo-German Chamber of Commerce. Over the years it has become an established meeting place for influential decision-makers from the sector, including manufacturers, processors, architects, developers, planners and building specialists. The exhibition and conference are supported by GSI – Glazing Society of India, CCPS – Confederation of Construction Products and Services, UWDMA – uPVC Window & Door Manufacturers Association, ALEX – Aluminium Extruder’s Council, FOSG – Federation of Safety Glass and IGBC – Indian Green Building Council.
The exhibition saw the presence of leading national and international players including AluK, aluplast, profine, VEKA, Dr. Hahn, Gretsch-Unitas, Deceuninck, Technal, Hindalco, Geeta, Encraft and many more.
ift Rosenheim together with the Indian experts from IFF also presented a conference programme parallel to the exhibition this year. “The conference on ‘Green Building Envelopes’ is a major element of fensterbau/frontale india focused on universal design, quality, sustainability and security. The participants received decisive impetus on adapting advanced technology from Germany and Europe,” says Jürgen Benitz-Wildenburg, Director PR & Communication, ift Rosenheim.
There were also workshops for local fabricators in local languages in order to show how the high-quality products can be fitted and used in an optimum way. The initiative was supported by Geeta Group of Companies. One highlight in the supporting programme was the Architects Gallery, which showcased award-winning projects of the country’s leading architects who have integrated green technologies into their work. The second day of the show also coincided with the ArchiDesign Awards which were presented to India’s best architects during the Exhibitors Evening. The keynote was given by Dr. Ken Yeang, who is described by “The Guardian” as “one of the 50 people who could save the planet”.
The German Pavilion at fensterbau/frontale india attracted ten exhibitors this year: Alulux, aluplast, deutsche Passivhaus Transfer GmbH, Dr. Hahn, Gretsch-Unitas, Konrad Hornschuch, ORGADATA, Rhenocoll-Werk, UNILUX and VEKA. The pavilion offered one-stop quality products “made in Germany”. The pavilion is organized by the German Federal Ministry for Economic Affairs and Energy and the Association of the German Trade Fair Industry (AUMA), and supported by the Verband Fenster + Fassade (VFF – Window and Facade Association).
The next edition of fensterbau/frontale india takes place in the Bangalore International Exhibition Centre from 26–28 February 2015.