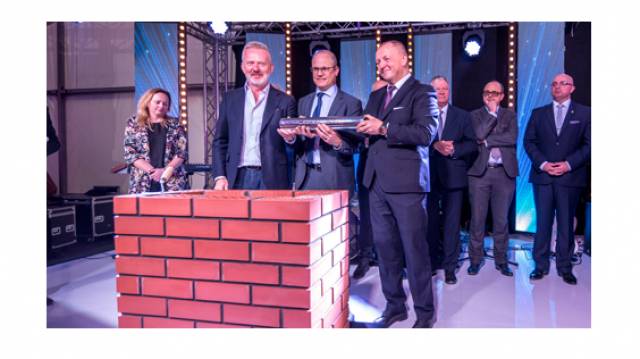 A special ceremony to place the cornerstone for the construction of the second float glass production line at Euroglas Polska was held in mid-March, while production on the new line is planned for the first quarter of 2019.

On 14 March 2018 in Ujazd, Poland, a ceremony was held to place a cornerstone for the construction of the second float glass production line at the Euroglas Polska sp. z o.o. glass factory.
The start of production on the new line is planned for the first quarter of 2019.
The ceremony was attended by, inter alia, representatives of the glass factory Euroglas Polska, the Swiss holding Glas Trösch, Press Glass and local authorities.
As stressed by Euroglas Polska: “The investment is a response to the continuously growing demand for such glass. The production on the new line, similarly to the production on the existing one, will be carried out with the use of the state-of-the-art technologies, with special focus on environmental protection.”
During the ceremony, a speech was delivered by Arkadiusz Mu? – Chairman of the Board of Press Glass SA which is a shareholder of Euroglas Polska. During his appearance he presented the event from his own perspective.
“We are witnessing an event – and I am not afraid to say it – that is an epochal event, both for Poland and for Europe. Due to the fact that today in Ujazd we begin the construction of the second float glass production line, in a year and a half this place will become the largest float glass production centre in Europe. This is all possible thanks to the great success of the first joint investment of Glas Trösch and Press Glass, started about ten years ago.”
Arkadiusz Mu? further stressed that such projects are the effect of long-term development strategy pursued by many entrepreneurs over the last decades.
“Our today’s success is not just the result of the last two years like many try to convince us now. This is the result of many years, a liberal economic policy, open Europe and primarily Polish and foreign entrepreneurs consistently investing for almost 30 years. It is thanks to them that such innovative, modern facilities like Euroglass that create valuable workplaces can be established in Poland.”
Euroglas Polska sp. z o.o. now operates one float line in Ujazd and manufactures coated glass with the magnetron method. The Swiss family holding Glas Trösch is the majority shareholder of Euroglas Polska sp. z o.o.