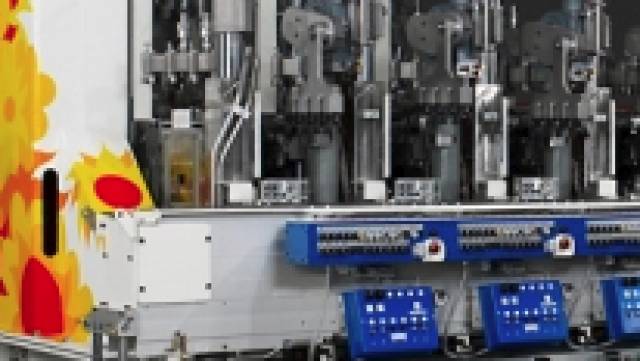 Founded in 1912, Emhart Glass celebrates its centenary year in 2012. The leading supplier of machines, controls and parts to the glass container industry worldwide was founded in Hartford, Connecticut by pioneering engineers Bill Lorenz, William Honiss and Karl Peiler.

Emhart Glass, the leading supplier of machines, controls, and parts to the glass container industry worldwide, is celebrating its centenary year in 2012. The company, in fact, dates back to 1912, when Hartford-Fairmont was founded in Hartford, Connecticut by pioneering engineers Bill Lorenz, William Honiss and Karl Peiler. The company was created to market Peiler’s revolutionary design for the paddle-gob feeder, which used gravity to automatically feed molten glass into moulds. Its successors went on to become the industry standard for glass feeding.
In 1924, the firm became Hartford-Empire and patented the IS (individual section) machine for automatically manufacturing glass containers. This too became an industry standard, quickly displacing rival technologies, and was continuously developed and refined over the following decades. Incredibly, the core technologies developed by Hartford-Empire for feeding and glass-forming remain essentially unchanged to this day.
Hartford-Empire developed quickly, selling and licensing its machines throughout the US and Europe. The 1940s saw the firm’s first moves into automated inspection, as well as the first of many acquisitions that would turn the company into a major industrial group.
Renaming itself Emhart and later Emhart Glass, the firm built a Europe-wide sales and manufacturing operation from the 1950s on, with plants and branches in Switzerland, Germany, Italy and the United Kingdom. The acquisition of Swedish manufacturer Sundsvalls Verkstäder in 1952 was an important milestone in these globalization efforts. During the 1970s and 1980s, it was followed by the first sales and service operations in the Far East. In 1987, the group transferred its headquarters to Switzerland.
In recent years, Emhart Glass has launched NIS, the world’s first completely servoelectric glassmaking technology, and FlexIS, the glass industry’s first fully integrated control system. A Research Centre was built in Windsor in 2007 including a fully functional glass plant, and a state-of-the-art manufacturing facility opened in Johor Bahru, Malaysia, in the following year.
In 2011, Emhart Glass struck a landmark joint venture with Shandong Sanjin Glass Machinery Co, China’s undisputed leader for glass machinery. “I’m very proud to be part of a company with such a long and impressive history,” comments Martin Jetter, Emhart Glass’ President. “It’s humbling to look back at what our predecessors achieved – they had such brilliant ideas, and they built up such a strong and enduring business too. Our challenge today is to live up to their legacy by serving our customers with new ways to improve the technologies we’ve inherited – and to add to them with innovations of our own, for the benefit of our customers and the entire glass industry.”