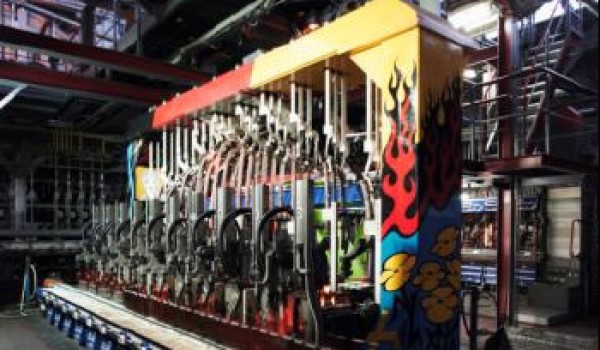 Emhart Glass has developed a new technology for manufacturing tempered packaging glass, which represents a milestone for stronger and lighter-weight glass containers, which will be commercialized under industrial production conditions in collaboration with Vetropack.

Emhart Glass, a division of Bucher Industries, has invested heavily in developing a new technology for manufacturing tempered packaging glass. The process will be commercialized under industrial production conditions in collaboration with Vetropack. This tempering process represents a milestone for stronger and lighter-weight glass containers.
For more than 80 years, flat glass has been tempered for use as safety glass. Emhart Glass is the world’s first producer of glass container manufacturing equipment to have succeeded in giving packaging glass the properties of tempered flat glass. The new, patented tempered glass technology was developed on the in-house glass production line, dedicated exclusively to research and development, at the Emhart Glass Research Centre in the US. The revolutionary process allows either a significant increase in resistance to breakage or a reduction in the weight of packaging glass. In practice, both these properties will be combined as required. The process is predestined to significantly reduce the weight of returnable bottles, while maintaining the same filling capacity. When tested by dropping onto a hard surface from a height of 1.5 metres, only very few filled bottles break, while conventional ones generally shatter. Tempered glass containers can be recycled like normal packaging glass.
Implementing downstream of the glass forming machine, the innovative tempering process can be used independently of that unit. It consists of uniformly heating the glass containers to the tempering temperature of just below 700°C and then rapidly and evenly cooling the inside and outside surfaces of the glass containers in a quenching unit. A completely new testing and inspection process, covered by several patents, has been developed specifically for inspecting the tempered glass containers. Further marketing of the technology will depend on the success of industrialization, now to be achieved in collaboration with Vetropack under commercial production conditions. Given the high capital intensity of equipment for manu­facturing glass containers, it is likely that the glass container industry will be cautious about implementing it. For this reason, Emhart Glass expects the market roll-out to take several years, with sales from this new technology consequently rising moderately.
Vetropack is one of Europe’s leading manufacturers of glass packaging. The line for tempering glass containers will be installed at Vetropack’s Pöchlarn glassworks in Austria in late 2012 and subsequently be used in an industrial production process for the first time.
Emhart Glass is the world’s leading supplier of advanced technologies for manufacturing and inspecting glass containers, with a portfolio encompassing glass container forming and inspection machinery, systems, components, spare parts, advice and services for the glass container industry. In 2010, the division employed 870 people, and generated sales of CHF 259 million. At the end of June 2011, Emhart Glass acquired a 63% interest in Sanjin, China’s market leader. Sanjin generated approximately EUR 40 million in sales for 2010, with about 1,200 employees.
Operating seven glassworks and a total of 16 melting furnaces, the Vetropack Group has a daily production capacity of more than 4,000 tonnes of packaging glass. In 2010, the Group employed 3,000 people, and generated sales of CHF 643 million.