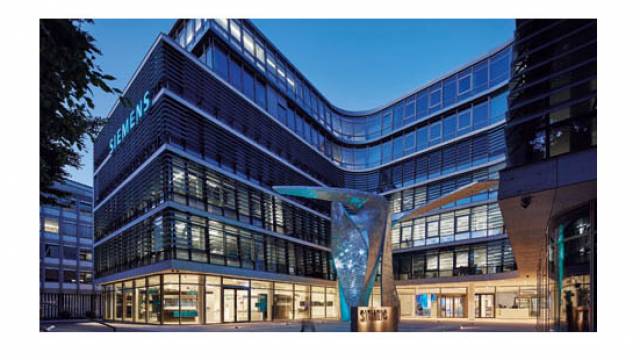 Edgetech spacers were used in a recent flagship project in Munich

The desert city of Las Vegas is exemplary in terms of its water saving, the city of Munich networks decentralised energy producers in a virtual power plant, Vienna is a test region for intelligent technology support for the elderly, smart cities are taking shape worldwide. Against the backdrop of demographic change and efforts to improve the quality of life in addition to the careful use of resources, the concept constitutes more than mere city marketing. Siemens AG has also committed itself towards the realisation of smart cities, in which intelligent technologies and the internet of networked things should decisively support a sustainable future. A key role can be seen in the buildings, which are responsible for up to 40% of the energy consumption demand. Siemens has set an example by announcing that it will be the world’s first industrial corporation to achieve a carbon neutral footprint by 2030. It therefore made sense to announce ambitious sustainability goals for the new corporate headquarters in Munich as well.
The three essential demands placed upon the building were that it should be open, innovative and save resources. The major challenge faced by the architects was to erect the new Siemens headquarters at the old site around two existing buildings on the Wittelsbacher Platz, one of them was the listed Ludwig-Ferdinand-Palais built by Leo von Klenze in a classical style in 1825. The ensemble of light-flooded buildings designed by Henning Larsen Architects with its five green courtyards has pulled off the difficult balancing act of combining tradition and modernity – in terms of the urban planning, but also architecturally. The atrium was consciously designed as a meeting place with a café and restaurant. The Siemens Passage that is largely accessible to the public connects the old part of the city with the Kunstareal (art district) in Maxvorstadt.
According to Siemens, the new head office consumes 90% less electricity and approximately 75% less water as a regular building. More than 7,400 energy-efficient LED lamps have been installed and more than 30,000 data points are connected to the building automation system. Thus energy consumption is reduced by some 25% solely with the aid of daylight sensors and presence detectors. The photovoltaic system covering a total area of 1,300 m2 provides almost 1/3 of the required energy. The rainwater is also collected on the roof. On average, 1.5 million litres per year are used for toilet flushing, outdoor irrigation and air conditioning of the buildings. The latter statistic reveals probably the most impressive figures. Every hour, 100,000 litres of water flow through 70 kilometres of pipelines and, depending on the time of year, provide heated or cooled rooms, while the energy is supplied by geothermal probes.
The glazing also makes a considerable contribution towards the sustainable energy balance of the new Siemens headquarters. For instance, all the façades facing the inner courtyards consist of solar selective thermal insulating triple glass and are inclined by 5% so even more natural daylight can flood the offices and courtyards than in vertical orientation of the glasses. The responsible façade specialist Strabag Metallica installed a total of 16,000 m2 of element facades during the three-year construction period. The Viennese glass processing company Petschenig glastec supplied the entire 8,000 m2 of glazing. 7,000 m2 of it were flat and curved UNIGLAS SUN solar control insulating glass elements. Obviously, despite all the transparency involved, safety was not neglected, so another 1,000 m2 consisted of bullet-proof and tap-proof glass units, among other things. By way of a final result the entire glass façade appears extraordinarily homogenous across all parts of the building. On closer examination, it is a showpiece of state-of-the-art glazing technology. 103 different glass structures were produced by Petschenig glastec to meet the high thermal insulation, solar protection, fire protection and security requirements. The constructional parameters of each individual pane structure were calculated, which were subsequently fed into the simulation for the entire curtain wall at Strabag Metallica. The glass façade in Munich ultimately achieved an excellent heat transfer coefficient of 0.9 W/m2K. There were a number of reasons behind Petschenig glastec’s decision to chose the Edgetech Super Spacer® Warm Edge System for its triple glazing units. “On the one hand, we were able to guarantee the required energetic performance without any problems for all windows and façade elements. On the other hand, the production on our Super Spacer® line has significantly optimised the project logistically and in terms of meeting the deadlines,” explains Managing Director Hanspeter Petschenig. The sorting, bending, desiccant filling and offline butyl extrusion as needed with rigid spacers bars is no longer required thus also eliminating many possible sources of error. The flexible Super Spacer® spacers are fed to the applicator in various widths as programmed from the reels. Although the production and provision of the different insulating glass units in the correct positional sequence remains a logistical challenge for the façade constructor or at the building site, the high degree of automation involved simplifies these tasks as much as possible with today’s technologies.
Edgetech’s Super Spacer® flexible foam-based spacer systems act as energy-efficient warm edge spacers in insulating glass windows. They significantly reduce energy loss to the outside, largely prevent condensation and also contribute to the lifespan of a window.
Edgetech Europe GmbH, located in Heinsberg Germany, is a fully-owned subsidiary of Quanex Building Products Corporation, an industry-leading manufacturer of components sold to Original Equipment Manufacturers (OEMs) in the building products industry. Quanex designs and produces energy-efficient fenestration products in addition to kitchen and bath cabinet components, with its head offices in Houston, Texas. Based on turnover Edgetech/Quanex is the world‘s largest manufacturer of spacers.Edgetech Europe GmbH is a sales location for the markets in continental Europe and one of the three worldwide Edgetech production plants, with a total of 450 employees and 16 extruders.