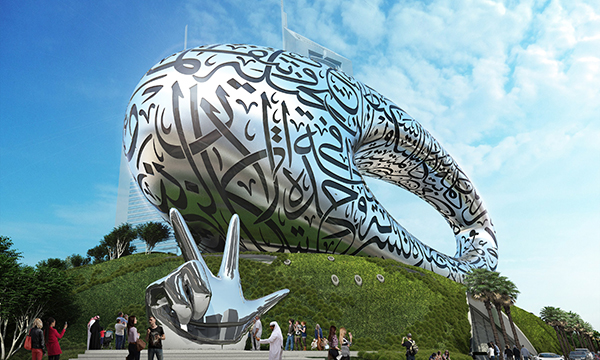 Dubai’s Museum of the Future is widely considered the most architecturally complex building in the world and 36,000 metres of Edgetech’s Super Spacer® have played an integral role in taking it from blueprint stage to reality.

It’s set to be ‘an incubator for ideas, a driver for innovation, and a destination for inventors and entrepreneurs from all around the world’, says its creator, UAE Sheikh Mohammed bin Rashid Al Maktoum.

And inside those units are more than 36,000 metres of Super Spacer® TriSeal™ Premium Plus.

“Even if you’ve planned curtain walling for decades, you always start from scratch on a project of this complexity,” comments Fernando Morante, AFFAN Technical Director.

“In the ten years since we first used Super Spacer to make free-form IGUs in Abu Dhabi’s Sheikh Zayed Mosque, we’ve had no problems whatsoever. That meant that, when it came to this even more ambitious project, Super Spacer was the go-to product.

“Its flexibility and outstanding all-round performance have let us go to the very limits of what’s technologically feasible. With a rigid spacer, that would be virtually impossible.”

Designed to enhance the performance of IGUs, Super Spacer TriSeal’s triple-seal design includes desiccated silicone foam, acrylic adhesive and a multilayer vapour barrier to offer outstanding performance. It’s been used in some of the world’s most striking and ambitious buildings, from Abu Dhabi’s stunning The Opus to the newly-renovated Eiffel Tower.