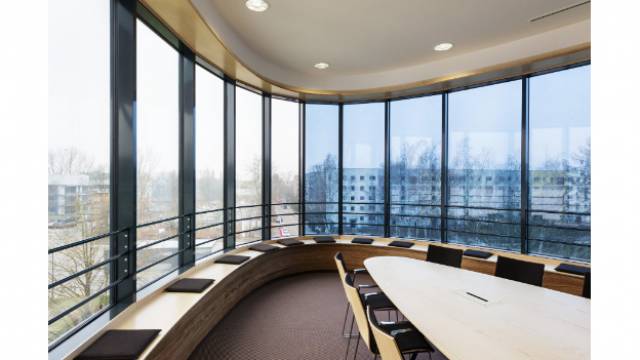 The new company headquarters of Eckert & Ziegler AG, specialist in medical applications for radioisotopes, is located at the Berlin-Buch research campus, one of the most important science and technology sites in Berlin-Brandenburg. The conference room of the headquarters is located in the elliptically shaped roof, projects 4.5 meters over the façade and features huge glass elements.

The Berlin-Buch research campus is one of the most important science and technology sites in Berlin-Brandenburg. The 320,000-square-meter area is now the home of more than 50 research facilities, hospitals and biotech companies. This is also where internationally operating “Eckert & Ziegler AG” is located. In 2012 just in time for its 20th anniversary, this specialist in medical applications for radioisotopes inaugurated its new company headquarters.
The conference room, located in the elliptically shaped roof, projects 4.5 meters over the façade and features huge glass elements. In order to maintain the exceptional appearance of this part of the building, the owner and the architect decided against an external shading system and instead voted for dimmable solar control glass by EControl-Glas (Plauen, Germany). The solar factor and light transmission can now individually be adapted to the amount of solar irradiation.
The Eckert & Ziegler group is one of the worldwide largest manufacturers of radioactive components for medical, scientific and metrological applications, with locations in Great Britain, France, India and the US. Due to increasing numbers in sales and employees, the company started a contest for a 5,000-square-meter extension of its headquarters at the Berlin-Buch biomedical science campus in 2011. The building owner stated one important requirement: The company logo ‒ an ellipse encased by a rectangle – had to be structurally integrated into the design.
Berlin architecture firm Hofmann Architekten won the bid with an energy-efficient building design featuring an exposed conference room in the geometrical shape of the logo. “With the extending roof and the rectangular, red-painted roof elements, the building is clearly recognizable as the Eckert & Ziegler headquarters, even from the air,” explains architect Jan Hofmann. The conference room, with all-around and nearly room-high glazing, offers a 180-degree view over the Berlin district of Buch.
On a clear day, however, the approximately 60 square meters of façade glazing are exposed to direct sunlight almost all day, due to their concavity and southern orientation. In order to keep the room from heating up as well as to prevent distracting glare, highly efficient solar protection was needed. “A variable external shading system would have been difficult to install and maintain due to the shape of the building. Rigid solar protection, however, does not let enough light in during the winter months. The solar gains are minimal then,” explains Hofmann. Also of major importance were the aesthetic demands of the owner: “The outside of the building had to be as smooth as possible. A shading system would have ruined the conference room’s optical representation of the Eckert & Ziegler logo. We thus opted for the dimmable solar control glass ECONTROL 48/9,” says Hofmann. Its solar factor is continuously adjustable between 33 and 9%. This eliminates the need for additional shading and the view from the conference room remains unobstructed. The transparency at maximum coloration is still 13%.
And this is how it works: The internal nano-structured coating of the EControl glazing is tinted blue by the so-called “electrochromic effect,” as soon as a low voltage (3 volts) is applied. When set at ‘light’, 48% of the daylight will enter the room, a good value for modern solar control glazing. At a Ug value of 0.7 W/(m²K), ECONTROL 48/9 also provides excellent protection against heat losses.
“EControl glazing has proved to be the perfect solution for our energy-efficient and optically sophisticated concept. The innovative electrochromic technology also perfectly fits a modern, future-oriented company such as Eckert & Ziegler,” adds Hofmann.