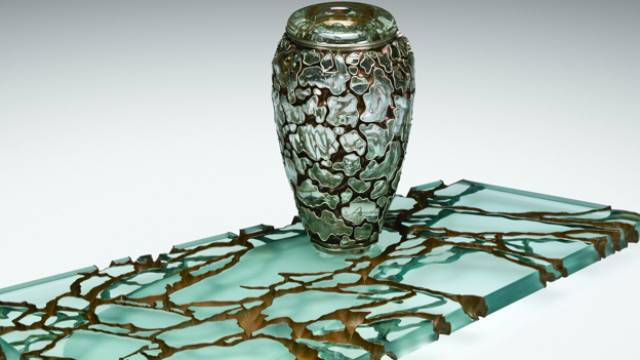 Los Angeles collectors Dan Greenberg and Susan Steinhauser have made a donation to the Corning Museum of Glass which primarily includes pieces made by noted studio glass artists, as well as a rare oval mosaic glass tabletop, made by the Venetian firm of Ulderico Moretti & C. about 1930.

The Corning Museum of Glass has received a gift of studio glass vessels and sculptures from Los Angeles collectors Dan Greenberg and Susan Steinhauser that will significantly enhance the Museum’s holdings of contemporary art in glass.
The donation from Greenberg and Steinhauser primarily includes pieces made from the late 1970s to the 1990s by noted studio glass artists, including Doug Anderson, Dale Chihuly, Václav Cigler, Dan Dailey, Michael Glancy, Diana Hobson, Richard Jolley, Silvia Levenson, Ivan Mareš, Paul Marioni, Klaus Moje, Seth Randal, Ginny Ruffner, Laura de Santillana, Therman Statom, Karla Trinkley, Ann Wolff, and Mark Zirpel. In addition, the gift of 24 objects includes a rare oval mosaic glass tabletop, made by the Venetian firm of Ulderico Moretti & C. about 1930.
“We are thrilled to add these works to the Museum’s comprehensive collection,” said Tina Oldknow, the Museum’s curator of modern glass. Dan and Susan’s contemporary collection is extensive, and these particular objects have been chosen to add depth to our collection, allowing us to better represent the individual artists’ bodies of work. The unusual murrine tabletop is a welcome and significant addition to the Museum’s collection of early 20th-century glass.”
Some of the pieces will be incorporated into the Museum’s current permanent displays this spring. Others, such as Ivan Mareš monumental sculpture, On Edge, will be placed on display in the Museum’s new North Wing, opening in 2014.
The earliest object in the donation of studio glass is a noteworthy vase by Michael Glancy, made in 1978-1979 titled Pope’s Piece, which comes to the Museum along with four other works by the artist. The gift also includes two colourful kiln-formed vessels by Klaus Moje, and a Pilchuck Basket by Dale Chihuly. Several of the artists represented in the donation have been awarded the Museum’s prestigious Rakow Commission, including Ann Wolff, Silvia Levenson, Klaus Moje, Doug Anderson and Diana Hobson.
Greenberg and Steinhauser have been supporters of the Corning Museum since 1986, assisting with the acquisition of important works, such as sculptures by Toshio Iezumi, Stanislav Libenský and Jaroslava Brychtová, Robert Rauschenberg, and Christopher Wilmarth and vessels by Dan Dailey, Richard Marquis, Benjamin Moore and the art nouveau glassmaker Emile Gallé.
“We are so pleased that these works will be displayed in Corning Museum of Glass galleries and exhibitions,” said Greenberg and Steinhauser. “It has always been important to us that our collection be available to the public as well as for education, and to advance the glass movement. We know the works chosen from our collection by our long-time friend and advisor, Tina Oldknow, will add value to the Museum’s collection.”
Greenberg and Steinhauser have collected American studio glass, with a focus on vessels, since the late 1970s. They began dispersing their collection to various museums in 2012 in honour of the 50th anniversary of the studio glass movement. Along with The Corning Museum of Glass, other institutions who have received gifts include the Los Angeles County Museum of Art; the Museum of Fine Arts, Houston; the Museum of Fine Arts, Boston; and the Minneapolis Institute of Art.
The Museum’s contemporary glass collection focuses on vessels, objects, sculptures and installations made by international artists over the last 35 years. Large-scale works are complemented by smaller-scale objects and nonfunctional vessels in a variety of glassworking techniques, including blowing, casting, kiln forming, flameworking, laminating, stained glass, beading and assemblage. The Museum’s collection reflects the shifting boundaries between contemporary art, craft, and design.
The contemporary glass holdings represent a significant portion of the Corning Museum’s collection of more than 45,000 objects. Works on display range from influential pieces by the pioneering makers of the American Studio Glass movement to new sculpture and vessels by younger artists to masterworks by internationally acclaimed contemporary sculptors.