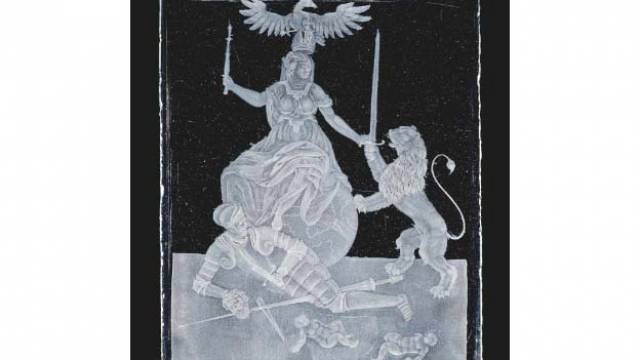 The 2013 Rakow Grant for Glass Research from the Corning Museum of Glass will support two studies by researchers Dr. Souen Fontaine of the Centre Camille Jullian (CNRS-Aix-Marseille University) in France and Dr. Rainer Richter of the Staatliche Kunstsammlungen Dresden.

The 2013 Rakow Grant for Glass Research will support two studies by researchers Dr. Souen Fontaine of the Centre Camille Jullian (CNRS-Aix-Marseille University) in France and Dr. Rainer Richter of the Staatliche Kunstsammlungen Dresden.
Dr. Fontaine was awarded a grant to study 4,000 archaeological glass fragments uncovered in the 2011 underwater excavation of the Arles-Rhone 3 wreck and surrounding port dumps. Research will include an analysis of the fragments (believed to represent 1,000 vases) to better understand and document the routes of glass trade through the port of Arles during the Flavian dynasty.
Dr. Richter was awarded a grant to research the stylistic differentiation between the Baroque glass engravings of Caspar Lehmann and of Georg and Heinrich Schwanhardts from Prague and Nuremberg in the late 16th to 17th centuries. His investigations on works in the Museum’s collection will focus on the individual “handwritings” of the engravers and the analysis of glass composition using X-Ray Fluorescence (XRF).
Dr. Fontaine’s research will continue work begun for her thesis, documenting the analysis of archaeological fragments dated to the second half of the first century AD. “The study of this collection is a fundamental and original contribution to our knowledge of the trade of glass during early Roman times.”
The analysis of the fragments will be classified according to a typological and chronological approach. “The database thus constituted will be used to characterize the products commercialized during the Flavian period that passed through the port of Arles, a key point in trade between the Mediterranean and Northern Provinces of the Empire: Gallia, Germania and Britannia.”
The result of the research will be to understand the routes of the glass trade in these ports. “Although it is difficult to argue trade flows during this time as we still know little about the centre of glass production during this period of economic change, we hope to draw just one of the great lines of direction of these objects: imports from different Mediterranean regions, long-distance trade and local trade, North-South traffic from workshops from/in Lyon to the Mediterranean coast, etc.,” says Dr. Fontaine. The study of this collection of fragments will be included in the publication of her thesis, scheduled for 2013.
Dr. Fontaine’s Ph.D. was awarded by Aix-Marseille University/Centre Camille Jullian (UMR 7299) in 2012. Her dissertation, Formes, usages et circulation du verre en Méditerranée nord-occidentale (Ier s. av. / Ier s. de n.è) : L’apport des sites littoraux de la Narbonnaise orientale, received Summa Cum Laude honors. Her publications include La ville au quotidian: Regards croisés sur l’habitat et l’artisanat antiques (Afrique du nord, Gaule et Italie) and upcoming in 2013 Du parfum pour les morts: formes et usage du mobilier en verre in Dying in Pompeii: Excavation of a burial area of Roman necropolis of Porta Nocera (2003-2007).
Dr. Richter’s research will focus on six objects in the Museum’s collection, including engraved plaques and goblets. “A macroscopic survey of the objects will note the increasing refinement in the technology of early glass engravings, while microscopic examination including high resolution digital photography may help to possibly detect sources for glass panes and vessels preferred by the artist.” The provenance of three plaques in the Museum’s collection, attributed to Lehman and Schwanhardt, and their connection to the Saxon court will be researched.
At the Rakow Research Library, Dr. Richter will consult contemporary descriptions on glass grinding and engraving by Kunckel, Sandrart, Zahn, Hertel and Doppelmeyer. In addition, he will research information on specific glass engravers, and their supplies and materials using for the engraving technique. “Art historical and technological publications on Lehmann and the Schwanhardt workshop should be studied. The commission of the engraved plaques Plaque with Cupid, Plaque with Three Crowned Lions and Plaque with a Personification of Victory, is obviously linked with the Saxon court. This will be investigated more thoroughly in the literature.”
Dr. Richter plans to present this research at the ICG XXIII International Congress, in July 2013 in Prague, as well as submit a paper to the Journal of Glass Studies.
Dr. Richter received his degree in material science, optics and engineering with a minor in Art History from the Academy of Applied Science in Munich in 1988. He was trained as an objects conservator at the Bavarian National Museum in Munich and the Cleveland Museum of Art (Post-Graduate Mellon Fellowship). His publications include The Waldenburg beakers and Johann Kunckel: Analytical and technological study of four corner-cut coloured glasses in IIC Contributions for the Vienna Congress (2012) with Christian Neelmeijer, and Die RFA-Pistole Niton XL3T für Kunst und Archäologie: Vor-Ort Analysen von frühneuzeitlichen Schnittgläsern, in: Metalla, Sonderheft 2, Archaeometry and Conservation (2009) with Dieter Böhme and Heike Stege.
The Rakow Grant for Glass Research was founded by the late Dr. and Mrs. Leonard S. Rakow, who were Fellows, friends, and benefactors of The Corning Museum of Glass. It is awarded annually to support scholarly research on the history of glass and glassmaking. Additional information can be found at www.cmog.org/research/grant.