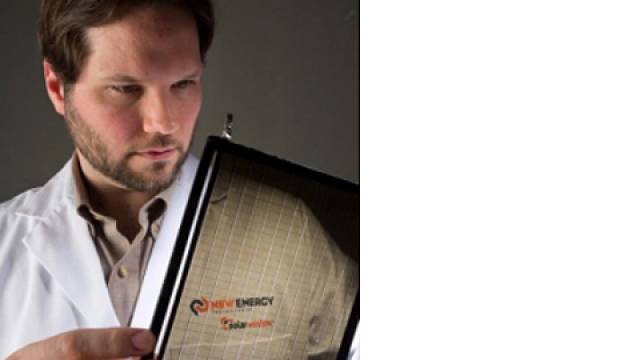 New Energy Technologies, Inc. (OTCQB: NENE) demonstrated their SolarWindow Modules to Congress during the first-ever National Lab Day in September, which was cosponsored by the U.S. Department of Energy (DOE). The Company’s high-performance, large-area SolarWindow modules were fabricated through the efforts of New Energy’s Principal Scientist, Dr. Scott Hammond, in collaboration with DOE’s National Renewable Energy Laboratory (NREL).
National Lab Day was a chance for the Department of Energy’s 17 national labs to display some of their cutting-edge scientific research and technical advancements to members of Congress. The demonstration of New Energy’s modules during this event is part of the company’s broader effort to raise awareness of the technology features and benefits as the company continues down the path towards commercialization.
SolarWindow modules were shown to Congress by NREL at the event to demonstrate a wide variety of cutting-edge photovoltaic technologies. “Demonstrating our latest, large-area and high performance SolarWindow modules at National Lab Day on Capitol Hill presents a wonderful opportunity to increase awareness of our SolarWindow technology and electricity-generating coatings to Congress and others among US governmental and scientific representatives,” explained Mr. John A. Conklin, President and CEO of New Energy Technologies, Inc. “Additionally, this exhibition also allows us to further strengthen our productive relationship with NREL and DOE by assisting them in demonstrating the value of industry-national laboratory partnerships for the development of cutting-edge technologies.”
SolarWindow is currently under development for eventual commercial deployment in the estimated 80 million detached homes in America and more than five million commercial buildings. The technology is the subject of 42 patent filings, and researchers are on track to advance SolarWindow towards the goal of full-scale commercial manufacturability.