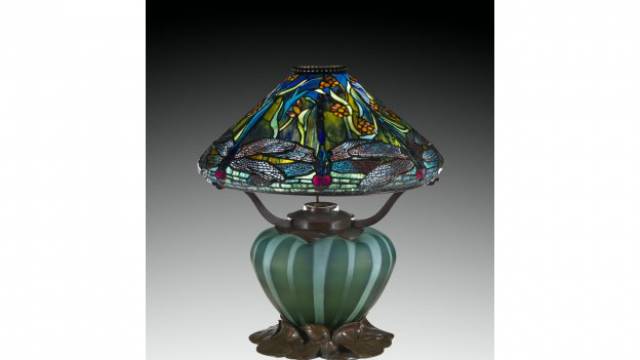 The Corning Museum of Glass has announced that it will place on display in its permanent galleries two remarkable examples of the decorative work of Tiffany Studios. One of the objects is a recently-acquired Dragonfly reading lamp designed by Clara Driscoll, while the other is an ecclesiastical stained glass memorial window commissioned for the United Methodist Church in Waterville, N.Y.

This month, The Corning Museum of Glass, which holds one of the most comprehensive collections of Tiffany glass and related materials in the nation, will place on display in its permanent galleries two remarkable examples of the decorative work of Tiffany Studios. One of the objects is a recently acquired, rare example of a dragonfly reading lamp by the respected Tiffany Studios designer Clara Driscoll. Also going on view is a recently conserved, ecclesiastical stained glass memorial window commissioned for the United Methodist Church in Waterville, N.Y., around 1901. The two pieces join a wealth of Tiffany materials at the Museum and expand its unique narrative of Tiffany production.
“Our Tiffany objects are among the most popular in the Museum,” said executive director Karol Wight. “We are delighted to add two such significant and beautiful works produced by Tiffany Studios to our permanent collection gallery. Both the dragonfly lamp and the memorial window represent important innovations and help us demonstrate the range of Tiffany’s glassmaking techniques.”
Made in 1899, the Reading Lamp with Dragonflies and Water Flowers is an early example of a lamp by Driscoll, and is one of the first four lamps that she made with dragonfly decoration. The Museum’s lamp is notable for its intricate leaded glass shade, which is ornamented with six large dragonflies with iridescent wings, as well as numerous water flowers. The shade sits on a blown and acid-etched, spherical, green glass base and cast bronze foot, which take the form of water lily leaves. The lamp is a significant example of an original shade and base remaining together with little restoration – often, over the years, bases and shades from Tiffany lamps become separated and may be rejoined with parts from different lamps. The Corning Museum owns three other examples of Tiffany lamps made between 1895 and 1905. Together, this collection of lamps demonstrates the ingenuity, evolution, and varied creations of Tiffany Studios.
Also recently installed is an important example of a stained glass window by famed Tiffany Studios ecclesiastical designer Frederick Wilson. Commissioned in 1901 by the Brainard family in memory of Waterville banker and hops merchant Charles Green, The Righteous Shall Receive a Crown of Glory is remarkable for its large scale and for its integration of different types of glass and glass jewels, which the Tiffany Studios pioneered. The image portrayed on the window – of two angels escorting the soul of the deceased up marble stairs toward a large cross supported by three angels and into the light of heaven – is inspired by the New Testament passage Peter 5:4, “And when the chief Shepherd shall appear, ye shall receive a crown of glory that fadeth not away.”
“In the 1890s, Tiffany hired Frederick Wilson, who was his first in-house designer in the Ecclesiastical Department,” said curator of modern glass Tina Oldknow. “He was a prolific designer, and infused the department with new ideas. We are particularly fortunate to know who commissioned this window, why it was commissioned, and where it was originally installed.  Without the dedicatory panel, the window’s history might have been lost since over the course of its 50-year history, Tiffany Studios produced an estimated 5,000 windows, many of them with religious subjects.”
Donated to the Museum in 1996 by Mr. and Mrs. Bruce Randall, the window recently underwent extensive conservation and was lent to the Museum of Biblical Art in New York City for their critically acclaimed exhibition, Louis C. Tiffany and the Art of Devotion. The window is now featured prominently in the Museum’s permanent collection galleries, alongside Tiffany’s Window with Hudson River Landscape. This secular window – one of the Museum’s most popular and most photographed objects – provides an important counterpoint to the sacred window, demonstrating Tiffany Studios’ mastery of all subjects, and particularly of sensitive depictions of the natural world.