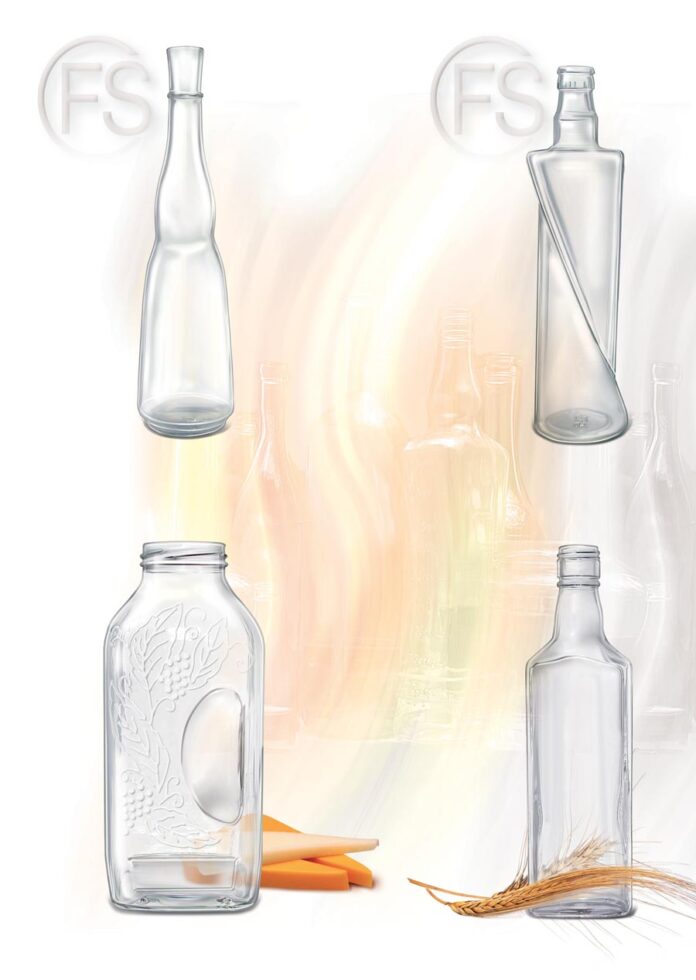 Founded in the 1970s, Chisinau Glass Factory has reached an important milestone this year – that of 50 years of activities. Thanks to active scientific work on the development and implementation of new technologies, along with significant achievements both economically, technically and in terms of introducing energy conservation, the company is continuing to update and expand its production range. 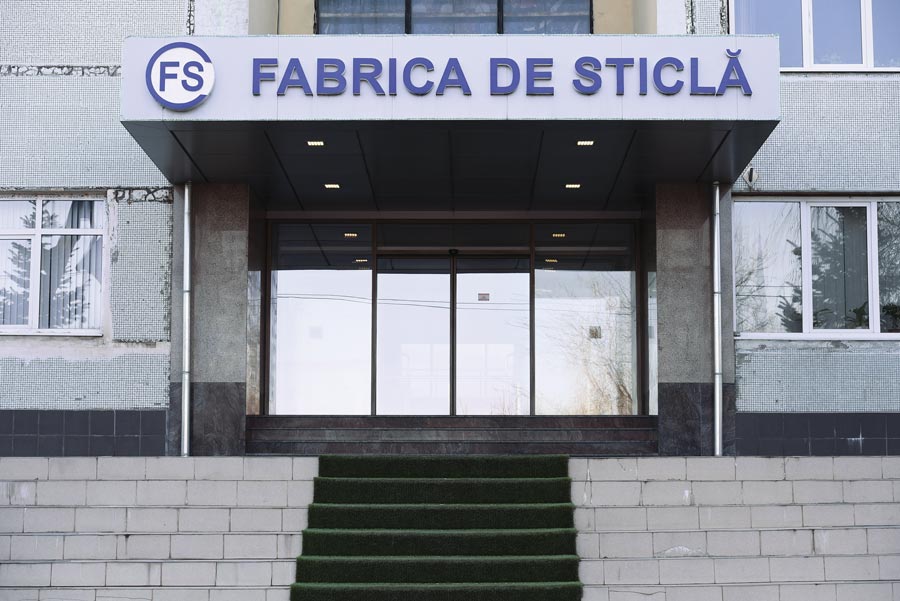 Chisinau Glass Factory is one of the leaders in the production of transparent containers in the region (Republic of Moldova, Romania, Bulgaria, etc.). In 2020, the company is approaching a new milestone in its development – 50 years. This means half a century of tradition, production, experience and providing the population of the region with a wide range of high quality glass products. Chisinau Glass Factory expands the range of possibilities for the production of various glass products each and every year.
Today, the company’s team consists of about 400 employees with vast experience in solving any problems at all stages of production (from the development of a new product concept together with the customer and ending with the delivery of finished products of the highest quality to the client). The pride of the Chisinau Glass Factory is a close-knit team very often represented by whole families and even dynasties very often created on the territory of the enterprise. The strength of our company is in a comprehensive approach to the tasks set, both from the side of technical workers and from the side of management.
Last year, the company solved a large number of problems thrown at it by the realities of modern business. Constant work is underway to improve the raw material base, which has a positive effect not only on the company’s economic indicators, but also on improving the efficiency and environmental friendliness of the manufactured products. The Chisinau Glass Factory has achieved outstanding results in the processing of secondary materials in the region, which contributes not only to a sharp decrease in the impact on the environment, but also to improve the situation in the region, which many similar companies in the region could not do.
The company conducts active scientific work on the development and implementation of
new technologies for processing parts by non-traditional methods at the micro level and the use of nanotechnology, which is constantly published at international scientific conferences dedicated to these problems, which has repeatedly been awarded the highest awards at the scientific level.
From a technical point of view, the company is pursuing a policy of reducing costs through improving quality while reducing dependence on external factors such as problems with supplies from external companies, reducing dependence on seasonal market fluctuations, etc. 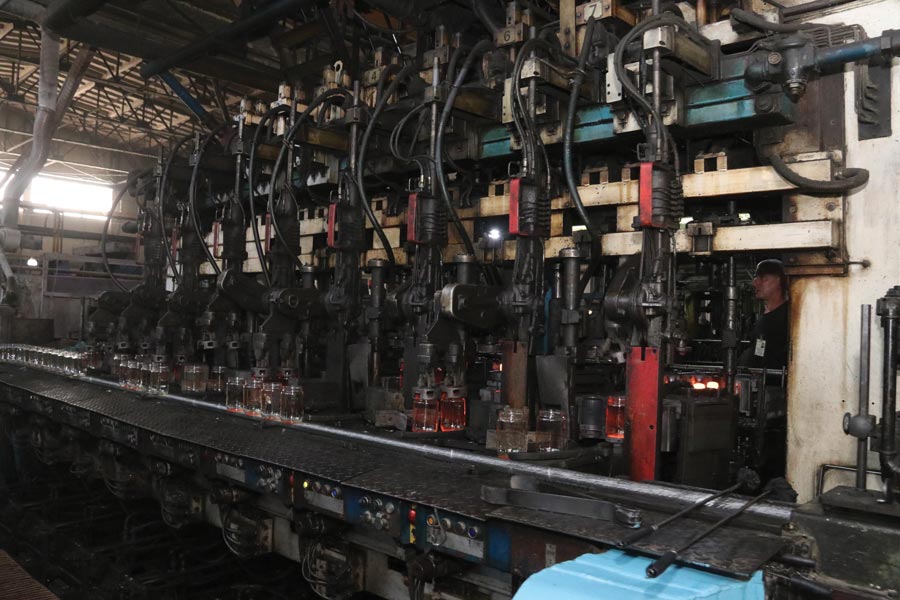 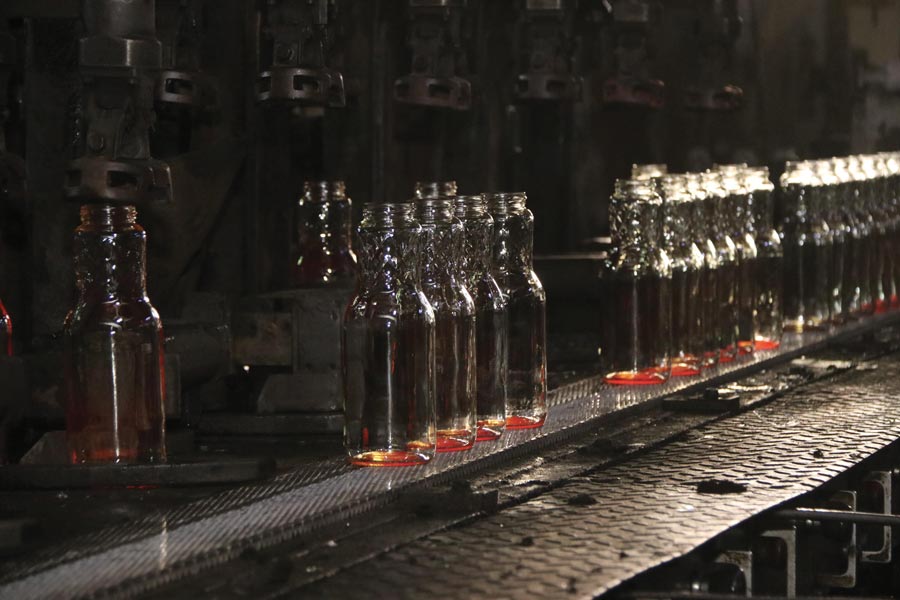 COMPANY HISTORY
The history of the company goes back 50 years. The company was founded in 1970. During this period, the company has seen both ups and downs. Production started on 28 June 1970. At that time, the assortment line was based on several products (mineral water, cognac and vodka bottles). After a short time, a second workshop for the production of containers for the dairy industry (milk, kefir and sour cream) was put into operation in 1972, and already in 1976, just four years later, a third workshop for the production of containers for baby food was put into operation. Subsequently, the production of goods for the population from red, green and blue glass was organized. Vases, ashtrays, souvenirs and even paintings were produced. In the course of constant work on modernization and expansion of production capabilities, the plant has repeatedly received awards and prizes of national importance (a special place among awards is occupied by a diamond star), which can be traced in the literature of those times.
The company’s production facilities for self-sufficiency in materials and matrices also ended up in the textbooks of specialized literature of those years. The company employed prominent representatives of the engineering and technical staff of that time, well-known among industry specialists in many countries. 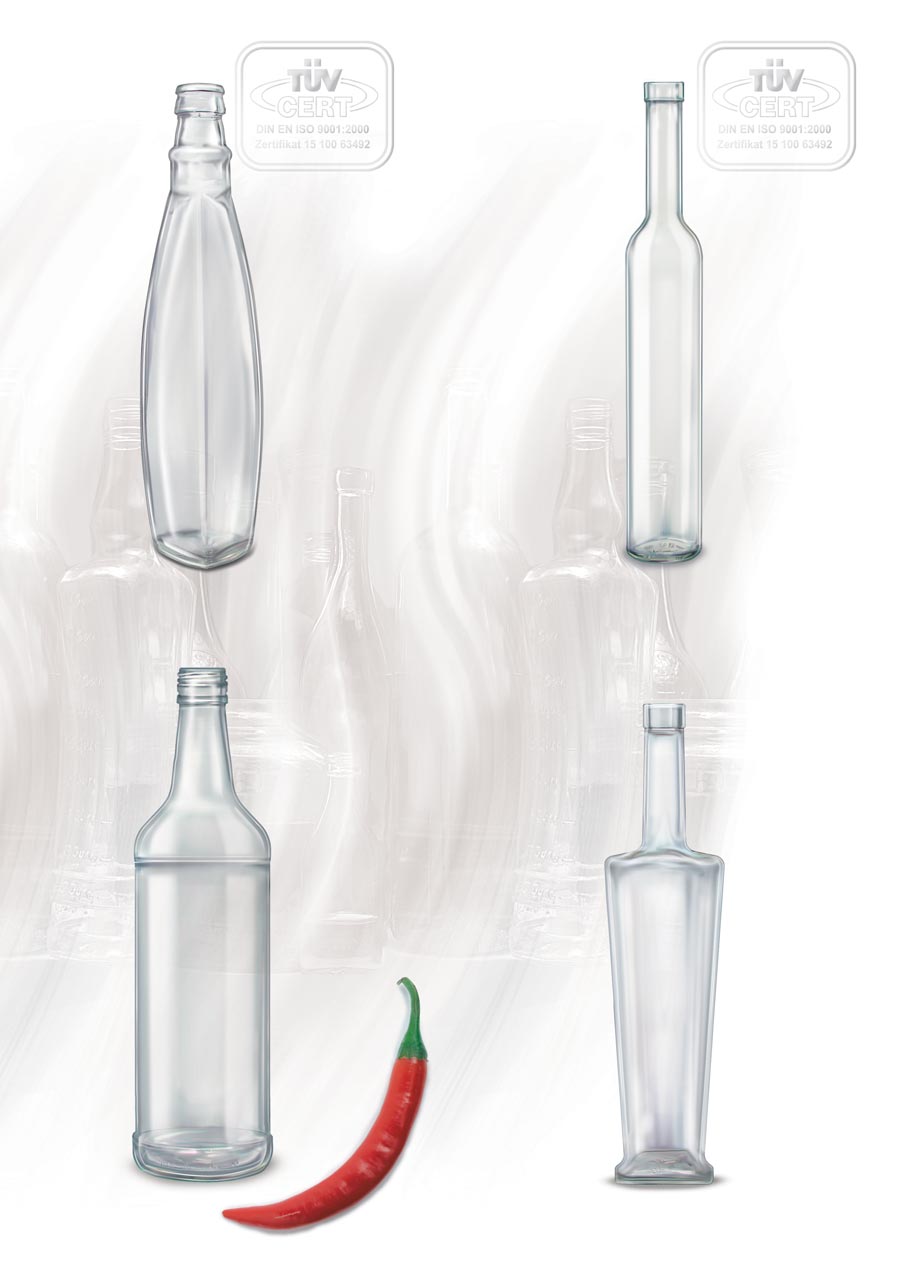 STAFF
The management of the company today is a team of young, highly qualified and promising managers headed by the General Director Perzhu Pavel.
Having started work for just over a year, this team has achieved significant achievements both economically, technically and in terms of introducing energy conservation with a simultaneous harmful effect on the environment. With his daily work he proves his high qualifications, efficiency and commitment to the common cause. At the moment, work is underway in several areas of activity. Expanding the client base, expanding the geography of product supplies and differentiating suppliers of high-quality raw materials and equipment that are so necessary for quick and high-quality satisfaction of the ever-increasing needs of customers. On the occasion of the Jubilee, the Glass Factory was awarded the medal of maximum dignity “Glory to Labor” by the President of the Republic Igor Dodon.

PRODUCTS
Chisinau Glass Factory today has a huge range of products. A bottle of all kinds of configuration and capacity is produced, ranging from 0.2 litres up to 3 litres. The company has a wide range of products for the spirits, wine and juice industries, as well as exclusive products aimed at various consumers. Glass jars from 0.314 litres to 5 litres. Glass jars produced by the company can be classified not only by volume but also by neck diameter. Starting from TO58 and ending with TO110. In recent years, the production of glassware with reduced weight has been developed in order to reduce the negative impact on the environment while increasing profitability both for our company and for the consumer, which is especially important in the case of long-distance transportation. 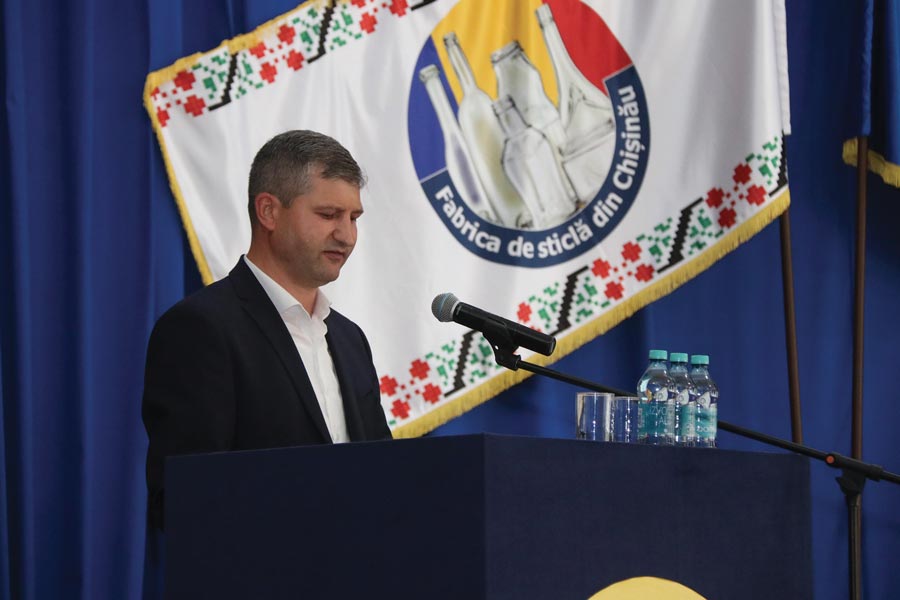 CLIENTS
At the moment, the company’s client base includes a huge number of both large and small clients in the Republic of Moldova and beyond. The geography of supplies includes such countries as: Romania, Ukraine, Bulgaria, Slovakia, Hungary, Greece, England, Spain and even Jordan.
The company focuses primarily on product quality and customer satisfaction. Contact meetings with clients are regularly held to clarify issues requiring a solution. The company also regularly participates in national and international specialized exhibitions where it often receives awards and diplomas confirming its active participation in the development of the market and the industry as a whole.

PLANS FOR THE FUTURE
In the foreseeable future, the company plans not only to work on assortments (which has been very active recently) but also to take real steps towards a serious modernization of production. First of all, this is preparation for the next cold repair. Already today, work is underway to improve the future (new) furnace design. There are plans to radically modernize the furnace design in order to facilitate the daily work both in terms of operation in general and to increase the removal capabilities. it is planned to equip the next furnace with modern electronic technological equipment for dosing loading of raw materials and cullet, improving control over the melting process both visually and directly operatively with technical data, reducing dependence on environmental weather conditions, as well as auxiliary equipment allowing significant savings in space heating plant and their use at the household level. Modernization of equipment to reduce the impact on the environment in terms of air cleanliness in production facilities and in the area surrounding the company.
Important investments are planned for the replacement of technological and production equipment, production line, annealing furnace, packaging equipment in order to increase its versatility. Thus, it will be possible to fully meet the needs of both industry and private use by the population of the region. The possibilities listed above should help to increase production performance by 25-30 per cent, while simultaneously reducing costs, increasing profitability of both small-sized products and containers, and relatively large products.
At the same time, this upgrade will open up the opportunity to improve the product line and their application areas. Development of new types of products is planned. Concrete steps in this direction are being taken today. First of all, this is an increase in the degree of product exclusivity. The company is actively exploring, until recently, free market niches such as the dairy industry, oils of various origins and premium quality spirits. The latter often require products with a thick bottom, which is not typical for mass production.
The direction of assortments for medicinal and table waters is also developing. This direction is absolutely new for the company and very promising. Current market trends require a company to be very flexible, which in turn is impossible without highly qualified personnel. On the occasion of the anniversary of the enterprise, the country’s leadership made a decision to award 12 veterans of the company with state awards, four of which are the Order of Maximum Dignity. 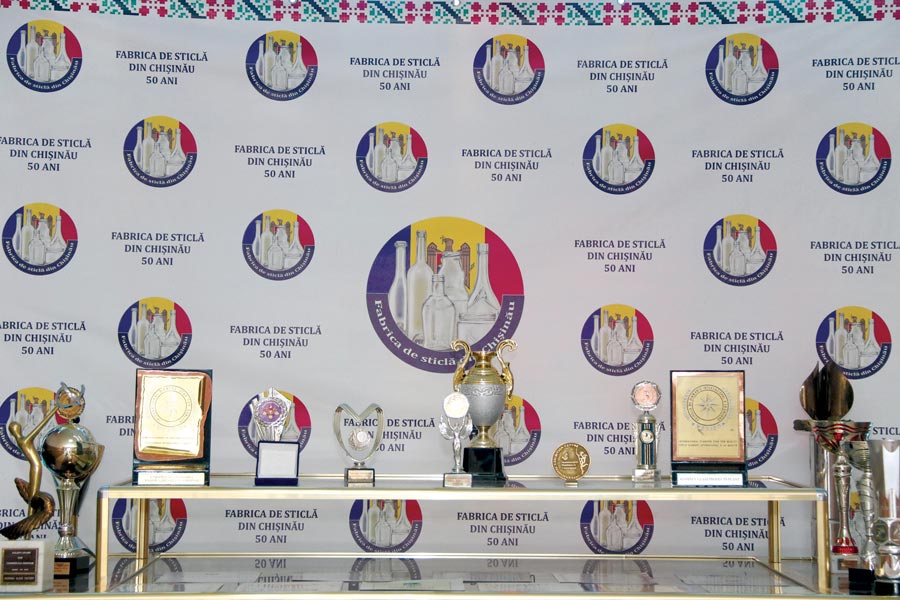