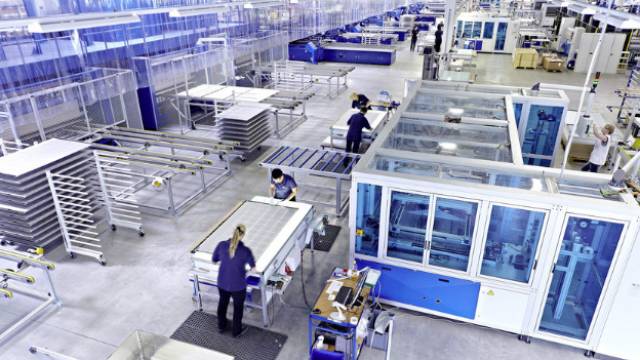 After announcing important losses in 2012, German Centrosolar Group has decided to put its solar glass division up for sale. The company has also postponed the publication of its annual report and announced the continuation of its restructuring measures.

Centrosolar Group AG has announced that its solar glass division is up for sale, following a year of important financial losses. The Germany-based company has also postponed the publication of its annual report and announced the continuation of its restructuring measures.
In 2012, Centrosolar saw its net loss increase significantly to EUR 89.4 million.
The Munich-based photovoltaics company recorded provisional 2012 revenues of EUR EUR 227 million, down 22% on the EUR 293 million reaped in 2011, despite “slightly” increased module shipments. Of this, its solar glass operations achieved just EUR 38.5 million on the back of increased competition, and lower market prices and volumes.
As such, Centrosolar has said it will sell the division off, meaning it will be reported as discontinued operations in the Consolidated Financial Statements.
After this adjustment, 2012 revenues totalled EUR 188.9 million, again a loss of 19.5% on 2011’s revenues, for the relevant operations, of EUR 234.7 million. Falling prices were blamed for the decrease. 2012 EBITDA, meanwhile, tumbled from EUR -10.4 million in 2011 to EUR -16.4 million.
Net loss consequently slipped from EUR 16.8 million to a very negative EUR 73.6 million. After taxes, this hit EUR 89.4 million. Cash and cash equivalents also fell from EUR 25.9 million in 2011, to just EUR 18.3 million in 2012; and group equity significantly from EUR 79.2 million to EUR 6.1 million.
Centrosolar has postponed the publication of its annual report. However, it said that the restructuring programme announced on 19 February will continue. At the time, the company said it aimed to reduce debt burden by around EUR 90 million by reducing staff numbers, closing sales offices, deferring upper management salaries and reorganizing finances.