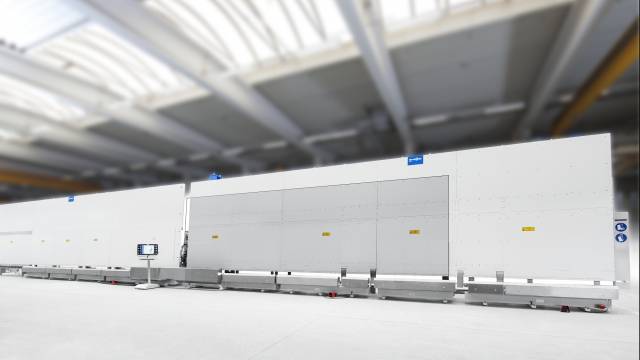 The growing trend towards the production of oversized insulating glass units and facade elements in glass processing is unmistakable. With the jumbo’sealer, Bystronic glass has once again demonstrated that the company group is a trendsetter for processing machinery and the production of architectural glass. “With the jumbo’sealer, our customers can automatically seal glasses measuring up to 9 metres in length or even longer on request”, said Marco Stehr, Head of Sales Europe at Bystronic glass. “In doing so, the product range is extremely comprehensive – double or triple insulating glass units, rectangular or shaped formats, up to 4-sided stepped elements – all of these items can be efficiently processed on this machine”.

It goes without saying that the exact dosing technology, which has been successfully deployed for some years following the introduction on the current best-selling Bystronic glass model, the speed’sealer, is also used on the jumbo’sealer. Triple insulating glass units are sealed in two cycles. This ensures that equipping times have been eliminated regarding nozzle exchange, when manufacturing units with alternating or asymmetric spaces between the lites.

The core of the sealing robot is its dynamic mixing system. In contrast to the static mixing system that is very common in the sector, the dynamic mixer works with significantly reduced material pressure. With a flow rate of up to six litres per minute, it also optimises available material volume. As a result, the jumbo’sealer is able to seal even deep spacer setbacks of rectangular units and model formats considerably quicker than other robots common in the sector, even at this current maximum size of 3300 x 9000 mm.
“What also sets it apart from other sealing robots in the glass industry is its automatic material changing system that, within two minutes, permits an operator-free changing of the sealing material – from polysulphide to silicone for instance “, said Mr Stehr. “Furthermore, there are several undergripping options in the discharge area which supports the removal of fully-sealed large glasses.”

Back in 1894, if Pierre de Coubertin had known of the technological opportunities that would be available in modern glass processing in the 21 century, maybe he would have added the term “bigger” to his classic Olympic motto.