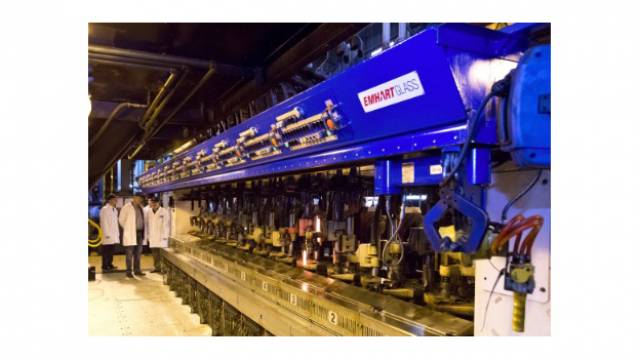 The first Bucher Emhart Glass’ BIS machine was installed at Nampak in South Africa on 22-23 October 2013. BIS machines are the latest addition to the company’s range of IS machines, using the parallel mould open/close technology pioneered on its AIS machines and is available in six-, eight-, ten- and twelve-section configurations.

Bucher Emhart Glass, the leading global supplier of machinery and equipment to the glass manufacturing industry, unveiled its first BIS machine at an open house event hosted by Nampak in South Africa on 22-23 October 2013.
BIS is the latest addition to Bucher Emhart Glass’ range of IS machines, and the first new machine type since NIS was introduced in 2000. Like NIS, it offers the supreme precision of a fully servo-controlled high flexible machine, designed to handle a wide variety of containers, sizes and weights, in smaller quantities and with quicker job changes, as most of the existing moulds can be fit (4 1/4 DG, 3”TG, 5” DG, 85 mm TG, 5 1/2 DG as others).
BIS uses the parallel mould open/close technology pioneered on Bucher Emhart Glass AIS machines and is available in six-, eight-, ten- and twelve-section configurations. The first machine handles double- and is prepared for triple-gob 95 mm productions. A quad-gob 70mm version is under development and will make BIS a servo electric glass container production machine challenging the today’s arcuate pneumatic IS machine configurations designed on 4 1/4, 5” and 5 1/2 sections.
BIS was announced at glasstec 2010 and successfully prototyped in 2011 at the Emhart Glass Research Centre in Winsor US, before the first 12 section 140 mm DG was manufactured and sold to Nampak Glass, South Africa. In May 2013, the world’s first BIS machine was started up successfully.
Six months after start up, more than 20 Bucher Emhart Glass customers made the trip to Nampak’s plant to see the machine in operation. They were able to hear directly from Nampak staff and managers about their positive experiences with the BIS machine. Bryne Sihlangu from Nampak brought it in his speech to the point: “There are many good reasons why BIS will replace 4 1/4, 5” and 5 1/2 pneumatic machines!” Nampak’s Managing Director Stoney Steenkamp, six months after experiencing undisputable features and benefits decided to get a second BIS, going into operation mid of 2014.
“BIS is a technology whose time has come,” comments Leo Diehm, Bucher Emhart Glass Director of Product Management. “As in other industries, precise fully controlled servo electric mechanism superseded pneumatic cylinders. BIS allows glass-container manufacturers to cut container cost at cutting edge container quality, greater performance by exceptional flexibility.”
Confirming that point, Bucher Emhart Glass has already sold its third BIS unit. Allied Glass, based in West Yorkshire, UK, produces a large variety of specialty spirits containers and decided to invest in a new BIS machine to help with its high-end quality requirements and frequent job changes.
Bucher Emhart Glass, a division of Bucher Industries AG, is headquartered in Cham, Switzerland, with offices and manufacturing facilities located throughout the world. The company is a leading supplier of forming machines, inspection machines, controls, and parts to the glass container industry.