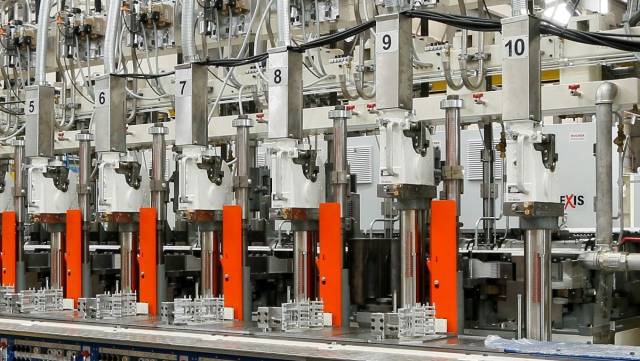 Bucher Emhart Glass, the leading global supplier of machinery and equipment to the glass manufacturing industry, is celebrating the 10th anniversary of its manufacturing plant in Johor Bahru, Malaysia.

Ten years ago, Emhart Glass (as it was then called) laid plans for a new state-of-the-art manufacturing plant in Taman Preindustrian Cemerlang, Johor Bahru, Malaysia. Construction began in 2008, and the new plant was officially opened in 2009. Covering a total area of around 6000 square meters, the plant replaced an existing site managed by Formac, a former supplier that Emhart Glass had acquired in 2006.

In the early years, JB’s main role was the assembly of new IS machines and cross-conveyors, plus the fabrication of welded parts. The new facility included a job shop and a warehouse, with space dedicated to training and demonstrations for both Hot End and Cold End products. It also served as a base for service engineers in the Asia-Pacific region.

In 2013, the plant was expanded to accommodate the assembly of all BEG’s IS and AIS machines, which have strong appeal for customers in Asia-Pacific, while the firm’s older plant at Sundsvall, Sweden focused on servo-driven NIS and BIS machines.

In its first 10 years, JB has produced 200 machines for 88 customers in 45 countries. The shipments went to customers on all 5 continents who visited the JB plant for machine acceptance tests. The 200th machine was a 6 1/4” double-gob AIS unit destined for Vetropack St Prex in Switzerland.

“We’re delighted to be celebrating our 10th birthday here at Johor Bahru,” says Bryant Wong, Site Manager. “We’ve come a long way since we finished our first IS machine for Shandong in 2007, and now we’re looking forward to the next 10 successful years.”

“On behalf of everyone at Bucher Emhart Glass, I’d like to congratulate all the team at Johor Bahru on the plant’s 10th anniversary,” adds Martin Jetter, Bucher Emhart Glass’ President. “Especially I would like to mention the high production standards and quality levels which they have sustainably achieved. With an impressive 200 machines manufactured and delivered, they’ve played a crucial role in our worldwide development over the last decade. We wish them all the very best for the future.”