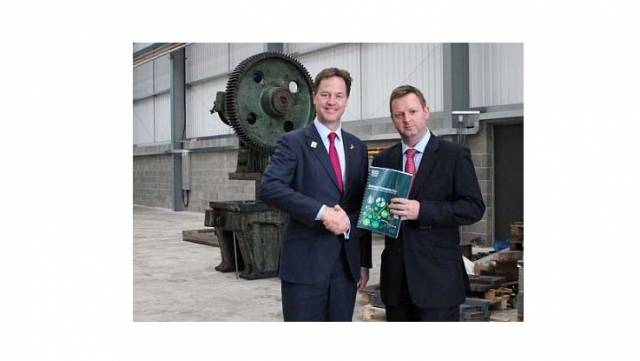 The UK’s British Glass association has been as one of the successful organisations to bid for funding from Sheffield City Region Local Enterprise Partnership (LEP). The funds will result in a boost for Sheffield City Region, which will create over 28,000 jobs and training for 40,000 people.

The British Glass Manufacturers’ Confederation, the trade association for the UK glass industry, has been confirmed as one of the successful organisations to bid for funding from Sheffield City Region Local Enterprise Partnership (LEP) through its Growth Deal.
Local leaders from the public and private sector have secured a GBP 320 million cash boost for Sheffield City Region, which will create over 28,000 jobs and training for 40,000 people.
This is the fifth most substantial Growth Deal that any City Region has made with Government as Ministers make their announcements for the 39 LEP areas across England. Deputy Prime Minister Nick Clegg was in Sheffield last week to confirm the final investment during a visit to a local business.
The cash boost for Sheffield City Region will contribute in supporting over GBP 600 million worth of infrastructure projects and the creation of a GBP 130 million Skills Bank, which will provide training for 40,000 people in the Sheffield City Region, including between 5,000 and 7,500 apprentices. The money will also be used to build new training facilities, including a new British Glass Academy.
Dave Dalton, CEO of British Glass and The Glass Academy, said: “This is fantastic news for the city of Sheffield and for us as the trade association representing the UK glass industry. We are delighted to hear Government is investing in skills and training projects, business investment programmes and the infrastructure needed boost the local economy and create new jobs.
“The glass industry is rooted in the work of a Sheffield University department 100 years ago so it’s fitting that the creation of the British Glass Academy as a world class centre of excellence and hub of glass training in the UK will be based in Sheffield. By investing in the skills base, up-skilling the workforce and promoting research and development, the Government is supporting the resurgence of the UK glass industry, recognising its heritage as well as its importance for the future success of manufacturing in the UK.”
James Newman, Chairman of Sheffield City Region LEP, added: “Sheffield City Region is getting a bigger share of the new funds than we might have expected and is clearly punching its weight when it comes to newly devolved powers and funds from Government. We have secured the fifth largest amount of any LEP area and we are one of a very small handful of LEPs being given significant freedoms by Government as to how we spend our funding.’’
“Our Growth Deal is the first step on a journey to enable the Sheffield City Region to take control of its own economic destiny. This is a strong start and, although we have not got everything we wanted, we have done well and we look forward to working with Government to increase their trust in our LEP so we will be able to take even more of our own funding and strategic economic decisions in the future.”