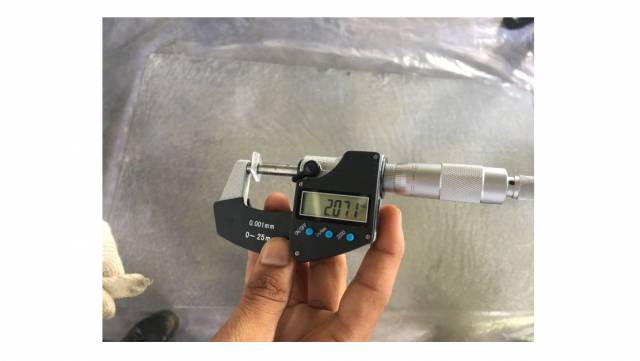 Borosil has created a line that can produce 2mm fully-tempered solar glass, which would come out at 1.6GW capacity.

Indian manufacturer Borosil Glass Works has completed acceptance tests for a major line of 2mm fully-tempered glass, which a company executive claims to be the first such glass produced at this thickness in the world.
The current world standard for solar tempered glass is 3.2mm, but Borosil has created a line that can produce significantly thinner glass, which would come out at 1.6GW capacity.
Pradeep Kheruka, vice chairman of Borosil, said: “We are the first people to have actually taken the risk of investing in a line that claimed they could do it and our gamble paid off.”
The firm performed an acceptance test, attended by Borosil and the line supplier, running the line for an eight-hour period non-stop without any problems. The next step is to send the glass out to be certified with reputed international bodies. Kheruka said he had no doubt that the product would be certified.
“The thinner glass should create higher efficiencies when used in a solar module, because there is less glass to absorb solar irradiance before reaching the cell,” added Kheruka. “Until now, any 2mm glass used in modules has been ‘heat-strengthened’ rather than fully-tempered, which means it is significantly weaker,” he claimed.
Borosil’s 2mm glass is the same price as the 3.2mm glass “with a small premium”, since drawing the glass out at 2mm thickness results in lower production.
Noting several windows of opportunity opened up with 2mm+2mm glass modules, Kheruka cited the new trend in PV module development towards glass-glass modules. These are thought to improve module lifetime and decrease the rate of failure due to the added insolation of having glass on both the back and front sides, instead of using a backsheet. The ability to use bifacial cell architecture also creates added efficiencies, with up to 30% increases in sandy desert environments for example.
Kheruka added: “Secondly, a module made with 2mm+2mm glass would weigh about 10 kgs/M2 as against 8 kgs/M2 for 3.2mm glass. Since this would be a laminate of two pieces of fully tempered glass, there would be greater safety than with a single piece of 3.2mm glass. Undoubtedly a better bet for roof glazing.
“This is going to make a safer more long lasting module and we are the first guys in the world to have done it.”
Despite there being a number of other tempered glass suppliers in India, Gujurat Borosil was the only petitioner in a recently successful anti-dumping case brought against imports of tempered glass from China (as long as one side is longer than 1,500mm, among other requirements). Kheruka will explain how the new duties could affect the Indian PV manufacturing industry on PV Tech next week.