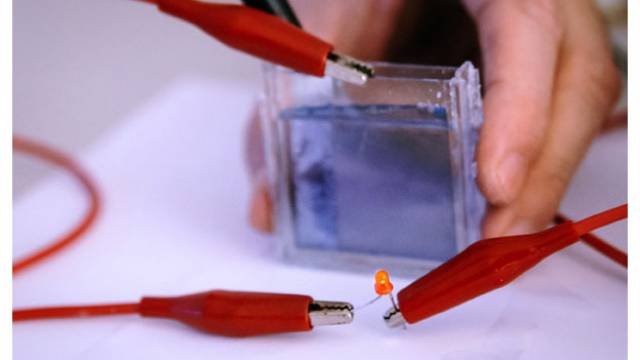 A self-tinting smart window that brightens and darkens on its own and without an external power source, and which also functions as a recharageble battery for low-power electronics, has been developed by researchers at Nanyang Technological University (NTU), Singapore.

Researchers at Nanyang Technological University (NTU), Singapore, have developed a self-tinting smart window that brightens and darkens on its own and without an external power source. But not only, say researchers. In fact, it actually doubles as a recharageble battery, requires no electricity, and can store enough energy to ‘fuel’ low-power electronics such as LEDs. Cool blue in daylight and clear at night, the tint-shifting window also reduces light penetration by close to 50%.
The work of the NTU team, led by Sun Xiaowei, professor at the University’s School of Electrical and Electronic Engineering, has been published in Nature Communications.
“Our new smart electrochromic window is bi-functional; it is also a transparent battery,” says Sun. “It charges up and turns blue when there is oxygen present in the electrolyte – in other words, it breathes.”
To create their bi-functional battery-window, Sun and colleagues placed liquid electrolyte between two indium tin oxide-coated sheets of glass connected by electrical cables. On one of the two sheets, they added Prussian Blue, and to the other, a strip of aluminium foil.
A recent press release states: “When the electrical circuit between them is broken, a chemical reaction starts between Prussian Blue and the dissolved oxygen in the electrolyte, turning the glass blue. To turn off the blue tint, the electrical circuit is closed to discharge the battery, turning the Prussian Blue into a colourless Prussian White.”
Because it’s energy independent and adjusts on its own, Sun and his team believe that their smart window could provide ‘significant’ cooling and lighting savings for homeowners and businesses.
“Our technology is very attractive as a zero-sum consumption smart window,” says Sun. “Buildings owners and even common households can reap energy savings right from the outset and over the long term. Developers who are looking at constructing environmentally-friendly green buildings will find our technology attractive for their building plans.