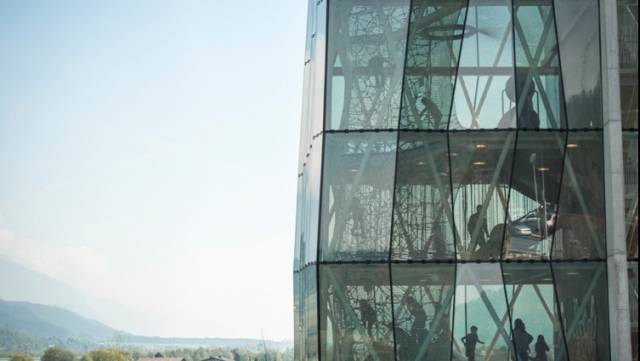 Berliner Play Equipment, world-class rope manufacturer, is pleased to announce the addition of a state-of-the-art net climber inside the Swarovski Crystal Worlds’ playto

The Swarovski Crystal Worlds is one of Austria’s most visited attractions, bringing in an average of 600,000 visitors annually. Opened in 1995 to commemorate the company’s 100 year anniversary, it recently expanded and celebrated a grand re-opening in April 2015 to encompass over 18.5 acres of land, more than double its previous size. Three main elements make up the expansion, including a 65-foot playtower and adjacent playground, a shop entrance, and a cafe and restaurant area.

The playtower offers a variety of play experiences on four unique levels set on top of each other. Inside this glass tower, whose facade consists of 160 distinctive crystal facets, is a nearly 46-foot tall, 3,425 cubic foot, spatial net taking over 120 at the same time. This is the largest such net ever installed inside a building, and it offers exciting and challenging experiences which enhance and develop psychomotor abilities and visual thinking.

Berliner has been manufacturing playground equipment including three-dimensional nets for over 40 years.