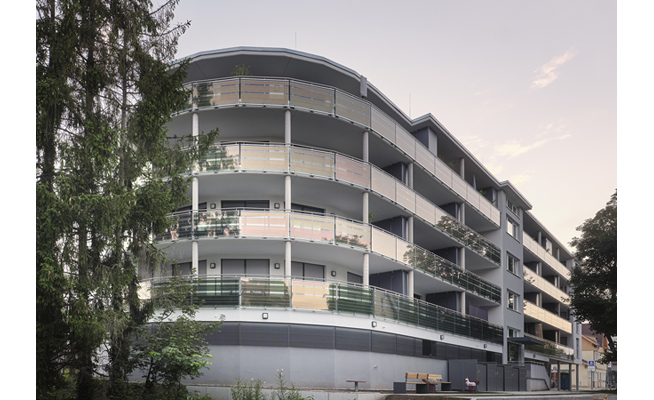 ARMOR solar power films GmbH from Kitzingen, Germany, known under the brand name ASCA®, has developed a new technology that allows organic photovoltaic (OPV) cells to be integrated quickly, easily and flexibly into any glass format and facade. Flat glass processor BGT Bischoff Glastechnik GmbH – based in Bretten near Karlsruhe, Germany – is now offering the transparent, energy-generating glass modules to the global construction industry. In addition to manufacturing the OPV components, ARMOR ASCA also plans the system integration, from cable routing and connection technology to the inverter. The solar power is fed into the public grid or consumed directly.

Energy-generating high-rise buildings
While the balustrades are transparent from the inside, they are translucent from the outside, thereby guaranteeing privacy from the outside. The solar power is produced by carbon-based organic solar cells, which ARMOR ASCA applies in very thin layers to fine films using a special printing process.

“With the glass balustrades, ARMOR ASCA closes a gap in facade construction. For the first time, safety glass for high-rise buildings can also generate energy,” said a delighted Martin Sulzer, who heads technical sales at BGT. He added, “The modules are ideally suited for facades because they are attractive, and there is also no complete loss of power even when partial shading occurs thanks to their technical properties.”

Unlike conventional crystalline solar cells, the organic solar films are not only flexible and transparent, but can also be bent and shaped as desired. The solar film can be produced in blue, green, grey and red. There are also no limits in terms of shape, length, size and design.

“We can produce any shape of solar cell, which thus becomes part of the architecture and design,” explained Hermann Issa, senior vice president in charge of Business Development & Project Management at ARMOR ASCA.

First project in commercial housing
Once the design has been completed, the system can be planned within about ten days. The first glass balustrades with integrated solar films went into operation in May at condominiums in Stuttgart Möhringen. “We are pleased to demonstrate how well our balustrades perform in this project. This proves that our technology also works excellently in commercial housing,” added Issa.