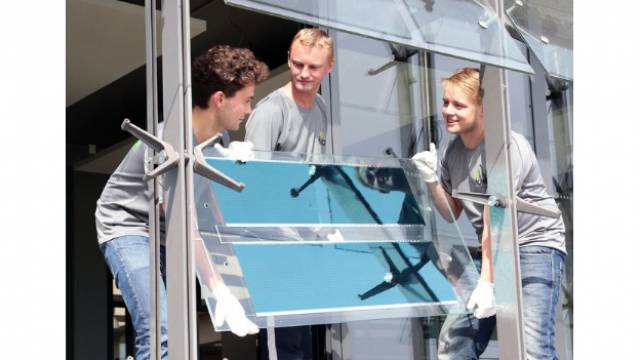 HeliaFilms were laminated into glass by AGC Glass Europe and installed on an east-facing façade at the Heliatek headquarters to demonstrate the material’s harvesting factor under less-than-ideal mounting conditions that can often occur in BIPV applications.

Heliatek, a developer of organic solar film, has completed the largest building integrated organic photovoltaic (BIOPV) installation of its type. HeliaFilms were installed at the company’s headquarters in Dresden, Germany. The films were laminated into glass by AGC Glass Europe, the European branch of AGC, the world’s largest producer of flat glass, and a business partner of Heliatek.
Thibaud le Seguillon, CEO of Heliatek, commented, “Our solar film is an ideal solution for building integrated solar installations. The durability of HeliaFilm and its superior harvesting factor suit it to a number of building and construction material companies.
Frederic Bonnefoy, Product Manager Active Glass at AGC Glass Europe, added, “Organic PV is much less energy-intensive to manufacture compared with crystalline silicon. HeliaFilm is ideally suited for glass curtain walls of all kinds. Its low light sensitivity and excellent high temperature performance make it the material of choice for a number of BIPV applications.”
Heliatek’s headquarters was chosen for installing the first HeliaFilm glass façade on an east-facing façade in order to demonstrate the material’s harvesting factor under less-than-ideal mounting conditions that can often occur in BIPV applications. A sophisticated datalogging system tracks the films’ operating temperature and ambient temperatures, intensity of the solar irradiation and the power generated. The power generated will be used by Heliatek to power its office illumination throughout the year.
Heliatek was spun off from the Technical University of Dresden and the University of Ulm in 2006. The company claims to be the leader in the field of organic electronic energy, and holds the world record efficiency of 12% through its leading edge material development and its proven capability for volume manufacturing.
Heliatek is the first company to begin commercialization of large area OPV solar film. Its business model is to supply the custom designed HeliaFilm to partners in industries such as building and construction materials, automotive and light architectural structures. Heliatek maintains a total staff of some 75 specialists at its facilities in Dresden and Ulm, Germany.
Investors in Heliatek include leading industrial and financial companies such as BASF, Bosch, RWE, Wellington Partners, eCapital and Aqton. Research and development work, as well as the installation of production technology has been funded by the Free State of Saxony, the Federal Republic of Germany and the European Union. Heliatek is currently operating its first roll-to-roll manufacturing line in Dresden.