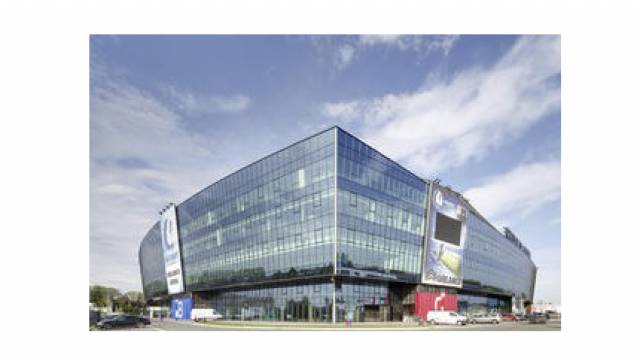 Thanks to the use of AGC’s Stopray Ultra-50 on Clearvision, the Ghelamco Arena in Belgium is one of the 18 stadiums nominated for Stadium of the Year 2013. Ghelamco Arena boasts a completely unique identity, thanks to an architecture featuring simple forms and elegantly consistent colours.

The new football stadium in Ghent (Belgium) unveiled in July 2013, the façade of which was glazed with AGC Stopray Ultra-50 on Clearvision, has been nominated for Stadium of the Year 2013. Ghelamco Arena is one of the 18 stadiums nominated from around the world.
Football club KAA Ghent has had a brand new stadium for several months now. The structure features nearly 33,000 m2 of glazing, 20,000 m2 for the stadium and 13,000 m2 for the offices. Situated near the crossroads of the E17 and E40 motorways, this new stadium is much more than just 20,000 seats. It is a multipurpose venue with bars and restaurants, a reception room, shops and offices – and two 10-storey office towers nearby.
The club’s colours are blue and white, so a bluish glazing was the obvious choice. With that in mind, the exterior façade was covered with laminated Thermobel Stopray Ultra-50 on Clearvision. This triple silver coated glazing offers excellent performance. It delivers superb solar protection with an extremely low solar factor of 23%, resulting in lower air conditioning costs. Moreover, despite different thicknesses, extra-clear Clearvision glass ensures a constant colour and a generous contribution of light, with a light transmission of 49%. The façade of the stadium’s inner ring is covered with Stratobel TopN+ laminated glass on Clearvision. The building also features Lacobel decorative painted glass (Blue Petrol, Brown Light, Black Classic) and Lacobel T toughenable painted glass (Crisp White).
It was promised spectator comfort that specifically won over the organisers of the competition, as well as the many functionalities on offer. Ghelamco Arena boasts a completely unique identity, thanks to an architecture featuring simple forms and elegantly consistent colours (architect: Bontinck Architecture and Engineering).
Kazan Arena in Russia features 8,000 m2 of Stopsol Phoenix Grey in its South, East and North exterior façades, as well as in the internal side of the stadium. In addition to its 45,000 seats, the stadium has areas for concessions, cultural events and health care facilities.
Of the stadiums set to host the 2014 FIFA World Cup BrazilTM in Brazil, Itaipava Arena Pernambuco stands out for its round shape and the special material in which it is clad: a high-performance fluoropolymer film, “Fluon®ETFE Film”, produced by AGC Chemicals. Some 65,000 m2 was needed to fully cover the exterior façade.