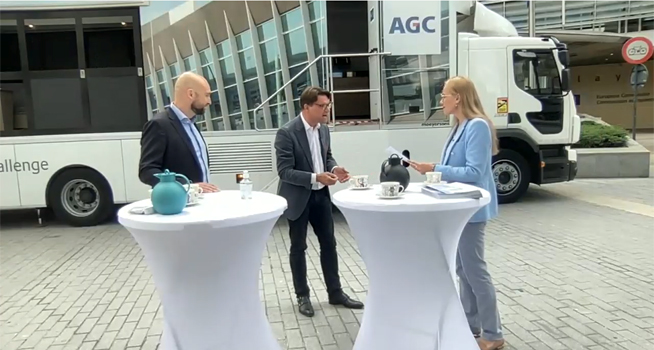 Just a few days before the “Fit for 55” package, the EU-based value chain for Building Integrated PhotoVoltaics (BIPV) met yesterday with the European Commissioner for Energy, Kadri Simson, outside the Berlaymont building.

Leading a grass roots campaign of over 200 European BIPV value chain partners (ranging from Academia to SMEs), ISSOL and AGC Glass Europe handed over a letter to Commissioner Kadri Simson asking for better recognition of BIPV in EU policies.

By driving a BIPV Shuttle in front of the European Commission’s headquarters, they were also able to showcase some of the most recent BIPV technologies – among which a perfect copy of a typical Berlaymont “louver” with PV-cells integrated in them. This prototype served as an example of the enormous potential of BIPV to decarbonize EU’s building stock.

But there are many other new and innovative applications of BIPV enabling building materials to contain PV cells – and this will help transform the whole EU building stock into a de facto energy generator. To be able to achieve the objectives of the Renovation Wave – e.g. renovating 35 million buildings by 2030, creating up to 160,000 additional green jobs in the construction sector and the EU’s overall aim of reducing 60 percent of GHG emissions in buildings, as well as their energy consumption – the industry must aim for the mass deployment of all kinds of solar applications, not only on roofs, but also on building facades, including BIPV.

During the exchange, the Commissioner took the time to look at the BIPV samples available in the shuttle, while discussing the importance of the energy transition, as well as the transition of the built environment and the important role of BIPV in that regard.

Olivier Demeijer, Managing Director of ISSOL, a Belgian BIPV SME, said, “Next week, the European Commission will launch the “Fit-for-55” package and we felt this is the right moment to hand over our letter to Commissioner Simson. BIPV’s potential is huge and can replace any conventional building material, even on protected cultural heritage buildings. BIPV building materials going into new and renovated EU buildings can already save up to 7 million tons of CO2 each year.”

Niels Schreuder, Public Affairs & Communication, flat glass leader AGC Glass Europe, said, “To reach the EU targets for energy efficiency in buildings and for an increasing share of renewable energies we need as much photovoltaic as possible, and roofs are just not enough. We need to look beyond the roof to the rest of the building. That is where the BIPV as a technology for facades comes in.”

Energy Commissioner Simson commented, “We welcome the open letter from 200 associations, SMEs and universities calling for better recognition of Building-Integrated Photovoltaics. We need new innovative solutions like BIPV. In order to meet the European Green Deal goals, our policies must include different types of solar technologies.”