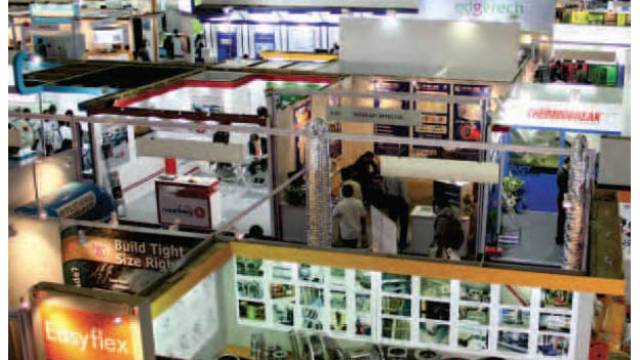 The recent edition of ACREX India 2014 had 400 exhibitors from more than 25 different countries, becoming a melting pot for organizations such as UNEP, CIBSE, EBTC & REHVA.

ACREX India 2014, which took place at Pragati Maidan, New Delhi, India, from 27 February to 1 March, saw the participation of 400 exhibitors from more than 25 different countries including Belgium, Czech Republic, Egypt, France, Italy, Japan, Malaysia, Saudi Arabia, Singapore, Spain, Switzerland, also Taiwan, The Netherland, UK, UAE and Ukraine. Besides this, the exhibition hosted country pavilions from US, Germany, Korea and China. ACREX India 2014 gained international significance by becoming a melting pot for organizations such as UNEP, CIBSE, EBTC & REHVA. UNEP held a series of roundtable discussions with speakers from Government of Bhutan, Italian Ministry of the Environment, Government of Maldives, UNIDO sharing their knowledge and experience with the attendees of the show. CIBSE used the platform provided by ACREX India 2014 to expand their base in India by creating CIBSE Chapters, REHVA & EBTC organized a delegation of EU Business House to further increase their presence in India and interacted with officials from Indian Government.
This year, ACREX India took a giant step at being a Carbon Neutral exhibition, a first, for any society or event in India. Carbon Neutrality was the message that ACREX India 2014 aimed to convey to all industry players in the HVAC&R industry and allied segments. Air Conditioning is the single biggest consumer of energy in a building amounting to nearly 60% of annual electricity bill, but with increasing awareness, both the end-users and developers are targeting ‘green development’.
Ashish Rakheja, Chairman, ACREX India 2014 said: “energy efficiency is no more an option, but a necessity to prevent power crisis as well as conserve the environment. To help fulfil this objective, ACREX India 2014 explored innovative ways of carbon offsetting. The exposition also aimed at promoting energy efficient buildings and the industry was able to see the latest energy efficient equipment in the field of air-conditioning, ventilation, refrigeration and building services under one roof.”
ACREX India hosted a set of insight driven workshops, interactive panel discussions and an in-depth set of associate programmes as well. These allied programmes were steered by leading experts, academicians and technocrats from across the globe. The workshops focussed on interesting topics like cool thermal energy storage in the era of sustainability, geothermal systems – design considerations, energy security – renewable or hydrocarbon, hospitals & critical healthcare facilities – HVAC systems design, seismic considerations in building design and BIM – revolutionizing the construction industry.
Giving an insight into the industry, Dipak Barma, President, ISHRAE, said, “the Indian heating, ventilation and air conditioning (HVAC) market is expected to grow by 30% to over EUR 2.35 billion over the next two years, mainly due to acceleration in activity in the infrastructure and the real estate sectors. Between 2005 and 2010 the HVAC sector has grown to be a EUR 1.17 billion industry, and has already notched up numbers currently, in the region of EUR 1.76 billion. As sectors like retail, hospitality, health-care and commercial services or special economic zones (SEZs), all require HVAC systems, the HVAC market is expected to grow by 15-20% year-on-year.”
Speaking on the successful completion of ACREX India 2014, Sonia Prashar, Managing Director of NuernbergMesse India, said, “ACREX India 2014 expanded new business horizons for all industry players in the HVAC&R sector. With support from various organizations and active participation from partners, exhibitors and visitors across the globe, coupled with high footfalls, the growth of the show has been exponential.”
The Expo created an environment for interactive discussions between manufacturers, developers, builders and other industry members. The show continues to attract footfalls confirming its status as South Asia’s largest and most talked about trade expo in the HVAC&R space with the number of visitors and exhibitors going up by year after ye