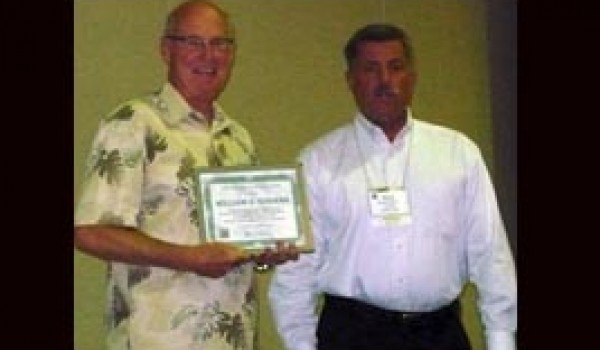 The US AAMA Board of Directors unanimously approved a motion to award Bill Gorman with Honorary Membership status at its National Fall Conference in Palm Springs, California.

At its National Fall Conference in Palm Springs, California, the US AAMA Board of Directors unanimously approved a motion to award Bill Gorman with Honorary Membership status with AAMA, as nominated by Ray Garries (JELD-WEN). Following his retirement from Milgard in 2001, Gorman continued to represent his company with his active participation in AAMA and NFRC.
AAMA President and CEO, Rich Walker (right in the photo), presented Bill Gorman with the Honorary Membership distinction.
The Honorary Member distinction is recommended for an individual who has shown exceptional dedication to AAMA, made considerable contributions to achieving the association’s objectives, held multiple leadership positions and/or maintained continuous participation for 20 years or more. This complimentary membership is awarded at the discretion of the Board of Directors by a three-fourths majority vote.
Gorman has served on over 35 committees, task groups and councils. He began actively participating in AAMA in 1985 and has attended the AAMA National and Western Region events consistently since 1990.
Over the years, Gorman has been an active participant in AAMA, having served in leadership positions, including Chairman of numerous committees and task groups, as well as president and vice president in the Western Region. Garries noted that: “Bill has been committed to this industry, driving various initiatives and remaining dedicated over the years to creating progress in the fenestration marketplace.”
Gorman has been revered in the past for his notable work and contributions. In 2002, he accepted a distinguished sponsor award on behalf of Milgard for their promotion of the InstallationMastersTM Program. He was also the 1998 recipient of the Residential Products Group Distinguished Service Award.
In the last 10 years, only three other individuals have earned this distinction: Doug Adams (Bronze Craft) in 2006, Tom Scheg (Mikron) in 2007 and Paul Warner (Quanex) in 2008. AAMA currently recognizes only ten individuals with this distinction.