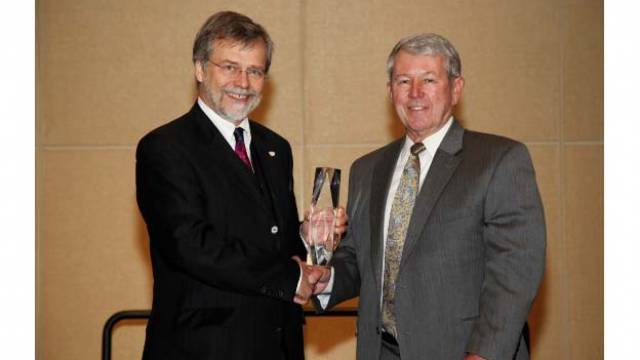 ZEISS Senior Vice President Product Strategy Lithography Optics has been selected as the recipient of the SEMI Sales and Marketing Excellence Award for outstanding marketing initiatives in the field of semiconductor equipment.

Winfried Kaiser – Senior Vice President Product Strategy Lithography Optics at the ZEISS Semiconductor Manufacturing Technology business group and the only member of the company to have been distinguished as a ZEISS Fellow – has been selected as the recipient of the Sales and Marketing Excellence Award. This distinction is awarded by SEMI, a global industry association for the nano- and microelectronics manufacturing supply chains. Kaiser accepted the award at the SEMICON West show in San Francisco. The Sales and Marketing Excellence Award is regarded as the most sought-after prize in the semiconductor equipment and materials industries and was established to honour outstanding marketing initiatives in the field of semiconductor equipment.
Winfried Kaiser has helped drive forward key lithography technologies that have now become industry standards, including 248 nm and 193 nm wavelengths and immersion lithography. He also initiated the launch of the EUV lithography development program in Europe. “Winfried Kaiser provides a compelling example of successful marketing and partnering in our industry,” said Denny McGuirk, President and CEO of SEMI, as he presented the award. “We recognize Winfried for his significant contributions to our industry and commitment to customer success.” The award selection committee also cited the complexity of Kaiser coordinating three tiers of the semiconductor supply chain as well as his contribution toward extending Moore’s Law. ZEISS develops and manufactures lithography optics, which, as part of wafer scanners are used for the production of ever more powerful microchips.
Dr. Michael Kaschke, President and CEO of Carl Zeiss AG, congratulated Kaiser on his success: “Winfried Kaiser has spent more than 30 years perfecting his ability to provide creativity and inspiration. He is tremendously skilled at identifying market requirements and opportunities and is highly regarded by his industry peers worldwide. As well as contributing to global recognition of ZEISS as a technology and market leader in the field of optical lithography, he has also given impetus to greater economic value added and high-quality employment.”
Dr. Hermann Gerlinger, Member of the ZEISS Executive Board, also praised Kaiser’s work: “Winfried Kaiser has had a huge impact on the development of semiconductor manufacturing technology at ZEISS. All the optical lithography systems produced by our company are based on his product strategy and his instinctive understanding of a dynamic market and its customers.”
Winfried Kaiser expressed his satisfaction with the award: “I’m delighted to have been given this distinction. It’s not just a reward for me personally, but also for the ZEISS team and management and our strategic partner ASML. Over the last few decades we have successfully worked together to turn our roadmap into reality, and it makes me proud to see this achievement recognized by the semiconductor industry.”
Winfried Kaiser is the 15th recipient of the Sales and Marketing Excellence Award, which was launched in 2000. Eligible candidates are nominated and selected by an industry jury consisting of former award winners. Kaiser will now also be appointed to this jury. The SEMI Sales and Marketing Excellence Award was inspired by the late Bob Graham, who had a defining influence on the semiconductor industry as part of the founding team of Intel. Kaiser first received the European SEMI Award back in 2006 together with ASML President Martin van den Brink.