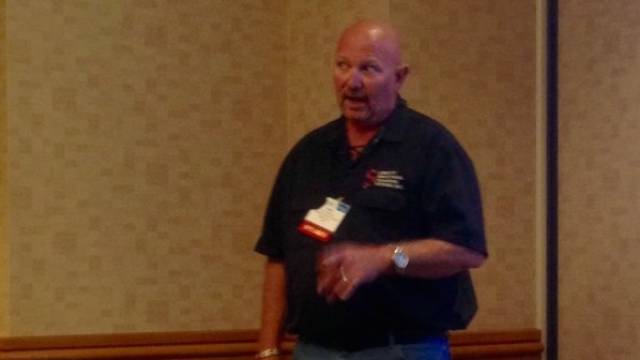 Years ago, Tony Samento watched a friend die in an on-the-job accident. The trauma affected him so much that he became a safety educator, started his business Samento Industrial Training, and he’s developed a hard-hitting course that shows, in occasionally gruesome detail, what workplace injuries and deaths really look like.

He brought his gripping presentation, which uses graphic photos and videos of deaths and injuries, to the recent Aluminum Extruders Council (AEC) Management Conference in Washington, D.C.
“I’ve been called in on 43 workplace fatalities,” he said. “That really hammers home the human cost of accidents.”
A big part of Samento’s presentation focused on forklifts, which are among the biggest workplace hazards. According to OSHA, there is a forklift-related fatality in the U.S. every three to four days, with somewhere between 80 to 100 deaths per year. There are about 850,000 forklifts in the U.S., and 11 percent of them will be involved in some type of accident each year.
Samento said seat belts are critical for forklift drivers, even though the vehicles rarely travel very fast. While about 75 percent of individuals killed with forklifts are pedestrians, the other 25 percent are forklift drivers – many of whom die because they’re not wearing seat belts and they try to bail out when there’s a tip-over, he said.
“You wear seat belts because if the forklift falls over, you don’t want to try to escape,” he said. “The load can fall on you, and unless you’re dating Lois Lane, you ain’t gonna make it. Stay in the vehicle.”
As far as dangers to those on foot around forklifts, Samento said there is no OSHA regulation about educating pedestrians who work near the vehicles. He urges drivers to maintain a three-foot clearance around the lift, because even non-fatal accidents can be gruesome. He proved that with perhaps the presentation’s grizzliest slide – a photo of a foot that had been crushed  by a forklift.
“When you go back, ask your people what area concerns them the most for pedestrian traffic,” he said. “The operators know about it.”
Samento also said forklift drivers should be aware of their surroundings at all times and must refrain from using cellphones while driving. They should look behind before backing up. Sounding the horn at blind spots is good, but using spotters is better. And if drivers can’t see where they’re going, they should travel in reverse.
In areas where forklifts are operating, Samento said “do not enter” tape is much more effective than “caution” tape.
“People will step right through ‘caution’ tape,” he said. “’Do not enter’ is much clearer.”
Visitors to facilities can pose a danger to forklift drivers, because they often aren’t familiar with the layout. Samento said keep people like truck drivers from walking around your plant.
Finally, he said the best safety advice for forklift drivers can be found in two words: “Slow down.”
Later, Samento addressed workplace safety culture and personal protective equipment (PPE).
“Management sets the standard,” he said. “They must wear protective equipment as well. If you go on a shop floor without safety gear, what message are you sending to your employees?”
He also said that the PPE must match the jobs that workers perform in the plant.
“Evaluate every function of each job to determine what hazards exist to the head, eye, face, hand, foot and extremities,” he said. “Often workers won’t wear the right equipment. Management must stay on top of this.”
He also urged attendees to create a safety-first culture at their workplaces – starting with people on the shop floor.
“We are the ones doing the job,” he said. “When we see something, that’s when we need to bring it to the supervisor’s attention. If it’s ignored, keep reporting it. In the meantime, what can we do to make sure we go home at the end of the day? Inattention to this can spread like a cancer.”
While ignoring safety can be dangerous or even deadly, paying attention can reap great benefits, Samento said.
“If every employee buys into this, these accidents will go away,” he said. “The bottom line is, if you see an employee at risk, walk over and say something.”