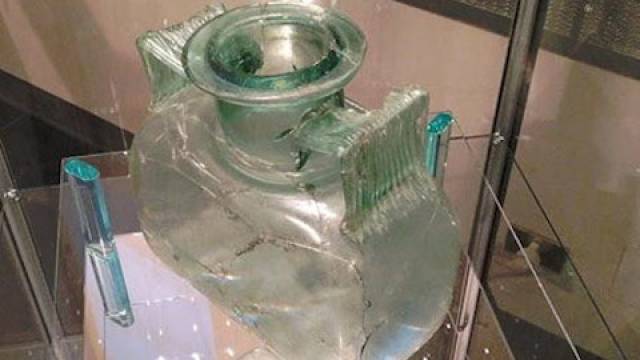 A 200 A.D bottle depicting a gladiator scene is now on view to the public at the “Alda Levi” Antiquarium in Milan’s Via De Amicis, thanks to the restoration work sponsored by Vitrum.

The unique piece adds to the findings of the Roman amphitheater in Milan. “It was an honor for Vitrum to help restore this precious piece and give everybody an opportunity to admire it,” said Vitrum’s director, Renata Gaffo. “For many years now, we have been combining sales activity, which is typically linked to international exhibitions, with cultural events that place the accent on the multi-faceted aspects of glass.
This extensive project, which kept us busy for large part of the year working on a team with others, fits into this picture perfectly. For Vitrum this is a way of contributing to the beauty that our country can give to the world”.
The bottle will be included in the museum collection and was presented to the public on Thursday 26 November in the presence of Filippo Maria Gambari – Superintendent for Archeology in Lombardy, Rosanina Invernizzi – Office for the Archeological Heritage of Lombardy, Maria Grazia Diani – President of the A.I.H.V. Italian National Committee and Renata Gaffo – Director of Vitrum.
The large glass bottle from 200 A.D. depicts a scene of a gladiator fight between a murmillo and a retiarius on the bottom. The bottle recently underwent delicate restoration work, which was made possible by Vitrum – international trade exhibition of machinery, equipment and systems for flat, bent and hollow glass and glass and processed products for industry – in cooperation with the Office for the Archeological Heritage of Lombardy and the National Italian Committee of the A.I.H.V. (Association Internationale pour l’Histoire du Verre). After being restored, the bottle was presented to the public for the first time at the Glass. The Great Unexpected exhibition at the 19th Vitrum which took place at Rho Fiera Milano from 6-9 October.
The bottle comes from Acqui Terme (AL), where it was found in the 1930’s. It was initially held in a private collection in Pavia and then given to the Milan Archeological Heritage Office. The first exhibition was in Milan in 1964, at a showcase of glass in Roman times that took place in Lombardy. Previous restoration work needed to be touched up before the bottle was placed on display to the public again. Vitrum took this opportunity to return a piece of very great historical value to the people.
The “Alda Levi” Antiquarium hosts other objects showing amphitheater games and the life of the gladiators. The glass bottle, with its fighting scene on the bottom, is perfectly at home here.