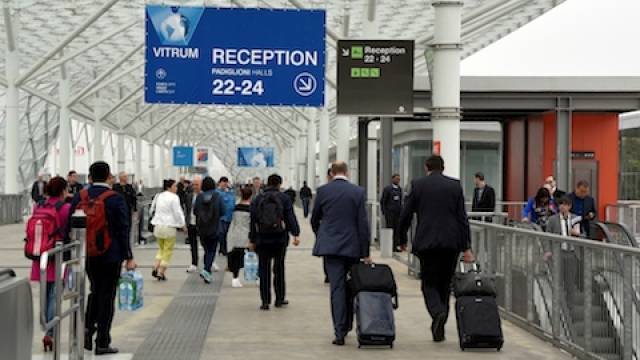 A total of 18,450 visitors flocked through the gates of Vitrum 2015, the 19th edition of the international trade show dedicated to machinery, equipment and special products for flat and hollow glass processing, which has just ended (October 6 – 9) at Fiera Milano Rho.

Italy’s appointment with the world of glass reconfirmed its top-ranking international status. Over the four days of the fair it attracted a high caliber of visitors comprised of both domestic (9,032 Italian) and international (9,418 foreign) industry specialists and buyers.
The numbers speak of a show consistent with the previous edition, according to Renata Gaffo,
Director of Vitrum. “The recently-concluded edition of Vitrum upheld the same levels as Vitrum 2013
– in terms of number of exhibitors, net exhibit space and even visitors, slightly fewer but of the same magnitude. In recent years the market has produced a kind of ‘natural selection’, favoring those businesses that invested heavily in innovation. Vitrum 2015 drew highly-qualified business contacts to exhibitors’ stands and corroborated signs of a slight market upturn. More and more, Vitrum is becoming known as an extremely technical event focused on the most innovative aspects of the glass processing industry – a specific emphasis that makes it very popular with exhibitors and
visitors”.
Vitrum 2015 statistics include:
Total visitors: 18,450
Net exhibit surface area: 19,723 sq. m
Number of exhibitors: 347
Foreign visitors: 9,418
Italian visitors: 9,032