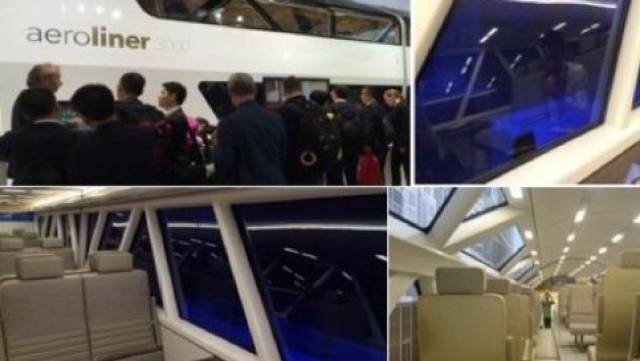 The 2016 event was an opportunity to showcase the versatility and diversity of innovative products using Research Frontiers film-based SPD-Smart variable light transmission technology. At four different locations at InnoTrans, Research Frontiers licensee Vision Systems, and their customers and strategic partners, exhibited many different types of SPD-Smart products all focused on improving the passenger experience. Products included:
Vision Systems’ SPD-Smart electronically dimmable windows (EDWs) provide unprecedented passenger benefits on all types of trains and other vehicles on the ground, aircraft in the air, and marine craft on the water. By enabling users to precisely control the amount of daylight and glare coming through windows, people can instantly tune the tint of the EDWs to a comfortable level while continuing to enjoy views, rather than blocking their view with a shade. The system delivers many other practical benefits including a cooler interior due to remarkable thermal insulation properties, and a quieter interior due to acoustic insulation properties.
AeroLiner3000 – Full-Scale Train Demonstrator with Vision Systems SPD-SmartGlass Products
The AeroLiner3000, a train being proposed for British Railway, made its world premier at InnoTrans at the booth of the German Aerospace Center (DLR). The interior of this 30 foot long (9 meter) 1:1 scale demonstrator was designed by Andreas Vogler Studio and includes SPD-Smart EDWs (Electronically Dimmable Windows) supplied by Vision Systems. In an information article DLR noted: “The design of the AeroLiner 3000 high-speed double decker train was inspired by business jets… the demonstrator is aimed at highlighting the feasibility, ergonomics and aesthetic appeal of a double decker train that is compatible with the UK rail network.”
SPD-SmartGlass EDWs for trains offer instant and precise control over the tint level of the window — from clear to extremely dark. They improve the passenger experience by allowing the optimum amount of healthy daylighting into the cabin, in real time, while passengers continue to enjoy their nice views. They keep the cabin cooler by blocking heat entering the cabin, and the acoustic insulation properties deliver a quieter cabin.
SPD-Smart EDW with Integrated Thin Transparent Information Display
At InnoTrans, Vision Systems also had the world premier of its latest innovative concept for the rail market — Acti-Vision — an SPD-Smart EDW that combines a dimmable window with an interactive display. It offers solar protection as well as interactive maps, travel services and other content such as safety information, meal/drink orders, etc. All of this is integrated in SPD-Smart EDWs that can be controlled by the passenger using a transparent touchscreen.
SPD-Smart technology allows passengers to regulate light and heat, reduce noise inside the cabin, while preserving their views without blocking it with shades or blinds. This application also allows passengers to interact with useful applications and services, directly on the window. Railway companies can build their brand and their image by offering creative tailored uses of this new interactive passenger amenity, and can also maximize revenues as a result of the increased value of window seats.
SPD-Smart Contrast Enhancement Filter for Information Display
Annax, a leading supplier of passenger information systems consisting of six companies in four countries (Germany, Switzerland, Austria and China), showcased another information-display related innovative application for SPD-Smart technology at InnoTrans. At their booth, Annax’s information display used an SPD-Smart contrast-enhancement filter supplied by Vision Systems. The functionality of the SPD-Smart filter brings more contrast to Annax’s information display, and facilitates reading the text on the screen.
SPD-Smart EDW with Multi-Zone Control
At their InnoTrans booth, Vision Systems exhibited a large multi-zone SPD-Smart window. This allows passengers to independently control the tint of different “zones” within the same window. This enhancement provides more comfort from a more accurate regulation of light. Passengers can select a darker level of tint to control light and glare from direct sun, and at the same time select a lighter level of tint in the part of the window not subject to direct sun, to maximize his or her magnificent view.
This benefit is possible because SPD-Smart light control technology is film-based, rather than coated directly onto glass as is the case with electrochromic technology. SPD film offers many other production, performance, and flexibility advantages over other electronically dimmable window technologies, including instant switching speed. (In contrast, a large train window using electrochromic technology could take up to 30 minutes to switch from clear to dark, as compared to a few seconds for SPD EDWs.)
Train Passenger Cabin SPD-Smart EDW
Amaronia Rail Ltd, a Vision Systems sales representative, exhibited a large-format train passenger SPD-Smart EDW supplied by Vision Systems. Amaronia notes on their website that especially when it is hot and sunny outside, large amounts of heat penetrate the train and make passengers uncomfortable and overload the climate control systems. “…If the sunshades are down, the passengers cannot enjoy the scenery outside. What if the solution could be so simple that the train guard, by just pressing a button, could dim all windows in the train, but in such a way that the heat of the sun would not any more penetrate, and the passengers could still see out and enjoy the scenery? Another possibility would be that every window is separately controlled by the passenger….”
Aftermarket Driver Cabin SPD-Smart Windows
Vision Systems exhibited at InnoTrans an aftermarket SPD-Smart EDW designed for use in the driver cabin — expanding the light and glare reducing benefits of Vision Systems’ SPD-Smart products from the passenger car to the driver area. This breakthrough solution for the light and glare issues commonly experienced in the driver cabin was seen for the first time by the public and the media at InnoTrans.
Driver cabins can be extremely difficult to shade, and this aftermarket product is installed over the existing window and brings dynamic solar control to driver cabins — providing automated management of light and glare, protection from harmful UV radiation, and heat rejection. It can be removed quickly in the case of emergency, and has high optical quality and scratch resistance.